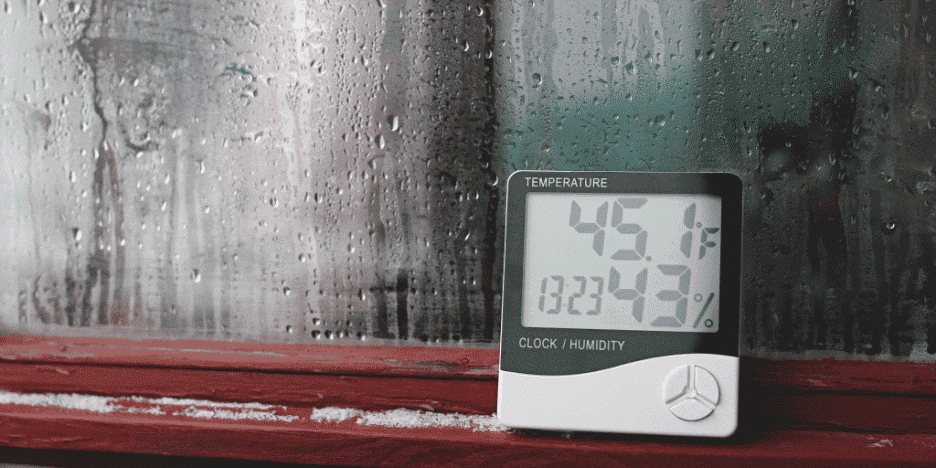 There are many factors to consider when choosing the right city for your next move. Housing prices, local economy, and distance to friends and family all play considerable roles in your decision. However, weather and regional humidity are two aspects of a location you should never overlook. If you’ve never lived in a city with extreme humidity, it can be a jarring experience.

To help you make the best possible decision for your next relocation, we here at House Method conducted a study that looked at the most and least humid cities in the U.S. This article sheds light on our findings and briefly discusses some of the major impacts humidity can have on your home.

Our research shows that the top five most humid cities in the U.S. are:

On the other end of the spectrum, the least humid cities in the U.S. are:

We gathered comprehensive data from the National Oceanic and Atmospheric Administration (NOAA) on the humidity of each city in the U.S. We then compiled this information to find the average annual humidity. We could rank each city from there, finding the most humid to the least humid. Below we will present each end of the spectrum, followed by the complete list of all analyzed cities.

Cities With the Highest Humidity 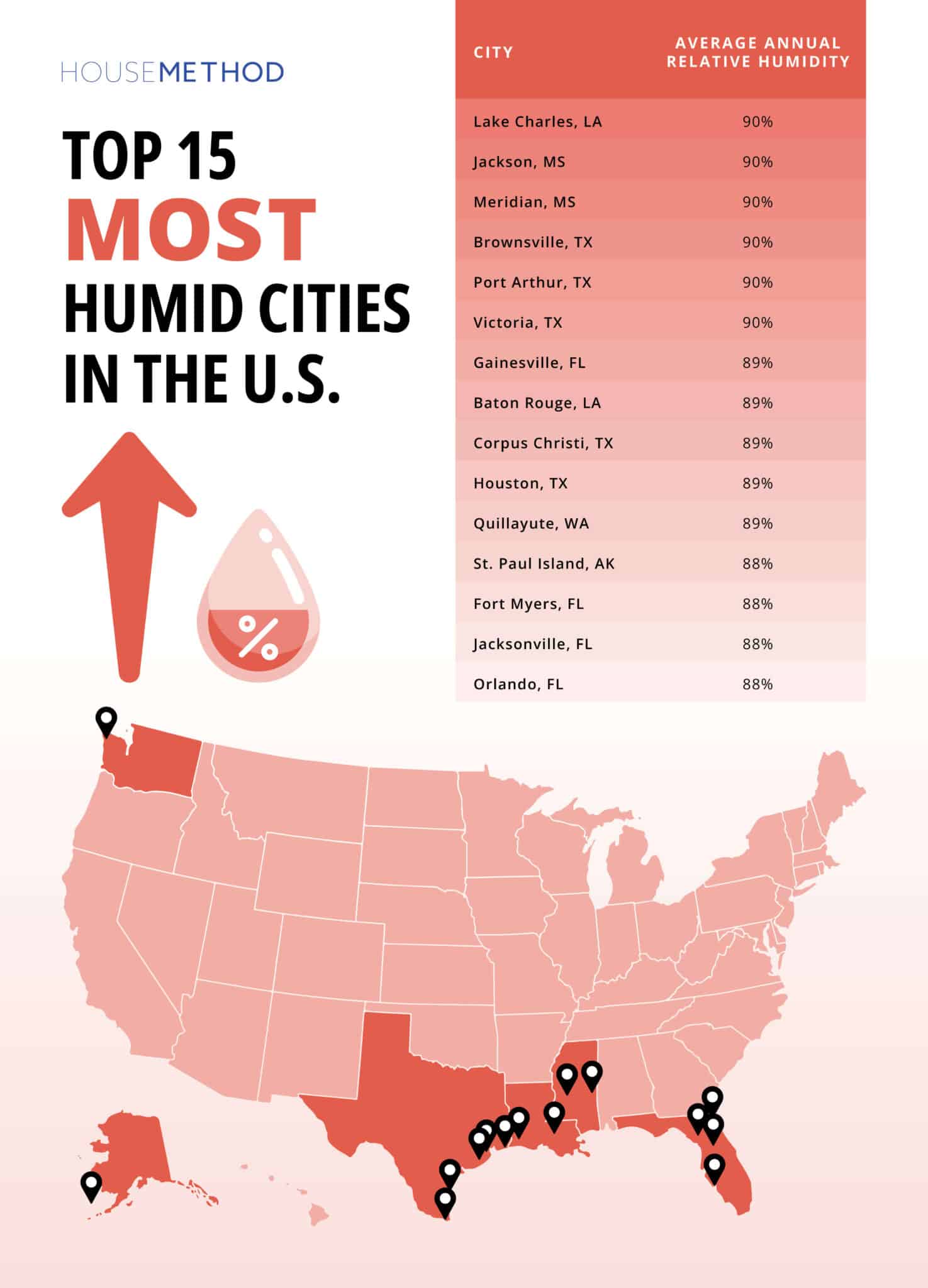 In the top five, we have Lake Charles, LA, Jackson, MS, Meridian, MS, Brownsville, TX, and Port Arthur, TX, all at 90% humidity. While Lake Charles, Jackson, and Meridian were not a big surprise, Port Arthur and Brownsville were more unexpected. Most people picture large pastures and arid deserts when they envision Texas. However, Texas is still a coastal state in the Gulf of Mexico with plenty of port cities.

Beyond the top five, we have Victoria, TX (90%), Gainesville, FL (89%), Baton Rouge, LA (89%), Corpus Christi, TX (89%), and Houston, TX (89%). Again, we see that Texas holds the most spots, comprising five of the top 10, followed by Louisiana and Mississippi, tied for second place. It should be no surprise that all states in the top 10 have been within the Gulf of Mexico. Jackson is the most inland city on this list, but its humidity is explained by its proximity to the state’s massive inland swamps and bogs.

The final five most humid cities on our list are Quillayute, WA (89%), St. Paul Island, AK (88%), Fort Myers, FL (88%), Jacksonville, FL (88%), and Orlando, FL (88%). This final set of cities threw a few curve balls, most notably St. Paul. We would have never guessed a small island in Alaska would rank in the top 15 most humid cities. The city of St. Paul rests on an island of the same name, located in the Bering Sea between Mainland Alaska and Russia. The island is cold, with temperatures ranging from minus 26°F to 66°F, with an average of around 32°F. Due to the island’s high winds, small size, and the surrounding water, even at its frigid temperatures, it possesses high humidity.

Our data shows that the most humid cities are those along the country’s southern border. While there are some exceptions, mainly Washington and Alaska, it’s important to remember that you don’t always need high heat to have high humidity. While heat is a major factor in producing humid climates, a location with enough rainfall (like Washington state) or a location exposed to high winds along large bodies of water (such as St. Paul) can produce humidity.

Cities With the Lowest Humidity 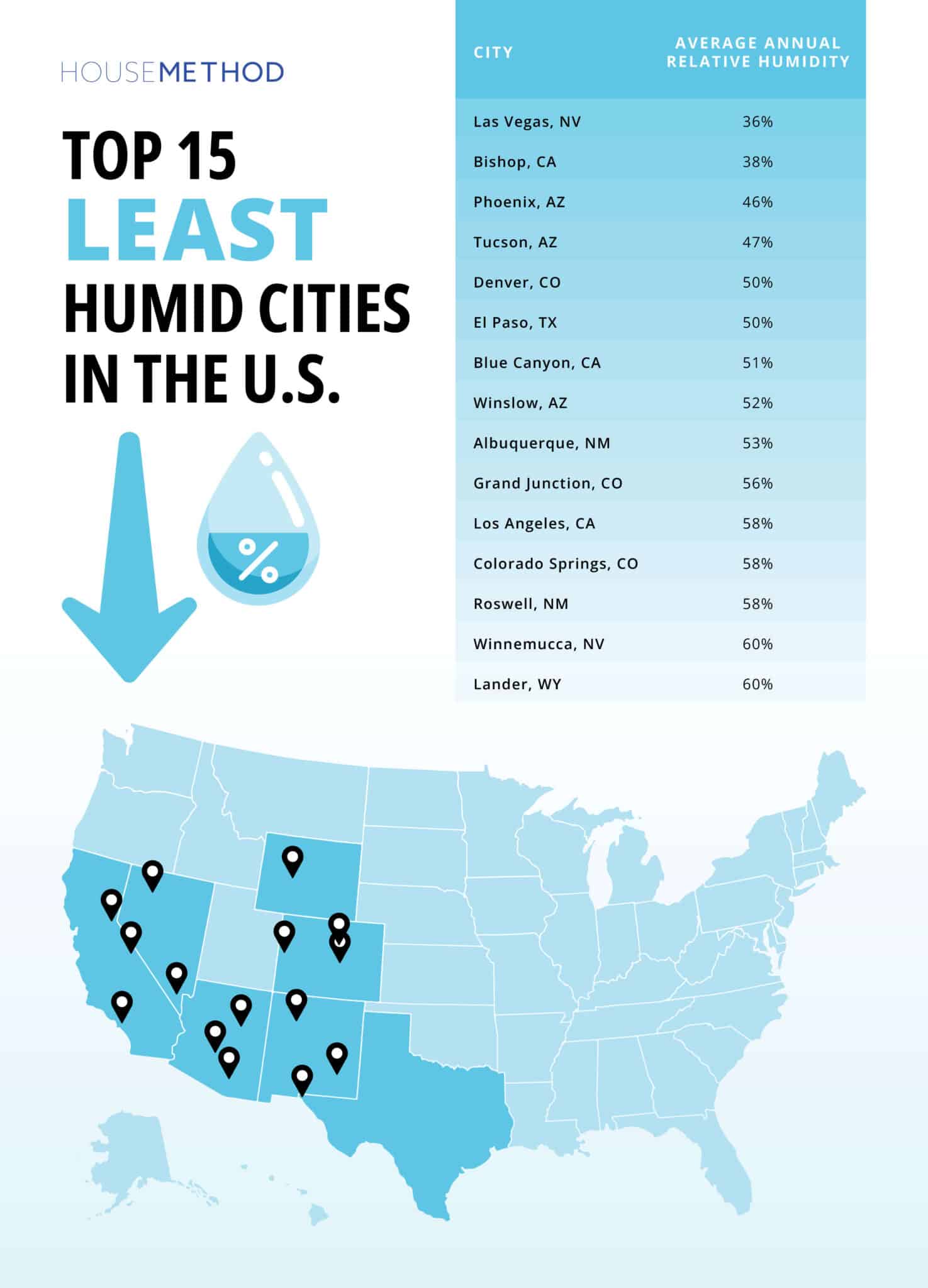 If you’re looking to avoid humidity, you might want to consider cities located in the Central or Western portions of the United States. The top five least humid cities are Las Vegas, NV (36%), Bishop, CA (38%), Phoenix, AZ (46%), Tucson, AZ (47%), and El Paso, TX (50%). This data shows the true diversity of some states’ ecosystems and environments. While California is a coastal state, Bishop lies far inland, on the other side of the Sierra Nevada Mountains, resting along the border of Nevada. We also have El Paso, showing Texas contains both the most and least humid cities in the U.S. While Texas does possess great humidity along its coast, it contains arid deserts, where El Paso lies. Specifically, El Paso rests in Texas’s northwestern corner, along the border of Mexico and New Mexico.

The last set of least humid cities in the U.S. follow suit to the first 10, including mostly central desert states. The final five include Roswell, NM (58%), Colorado Springs, CO (58%), Los Angeles, CA (58%), Lander, WY (60%), and Winnemucca, NV (60%). Unsurprisingly, Arizona holds the most spots in the top 10 driest cities, with a total of three. Behind Arizona, we have Nevada, New Mexico, and Colorado, all tied for second place with two entries a piece.

While coastlines create the most humidity, we can see that deserts create the least. If you’re looking for arid locations, your best bet is heading to the Central states. Or you can try locations like Texas or California, whose diversity of climates can allow you to experience both extremes with a quick car ride across the state.

This table shows the results of our study, presented in the form of a sortable table.  You can sort the table by rank, city name, or average annual humidity.

The results of our study came with plenty of surprises. For example, most homeowners would not suspect a city on an island just off Alaska to be one of the most humid in the U.S. It also shows that many states, particularly those along a coastline, like California and Texas, can have both extremely arid and humid cities. Overall, if you’re looking for a humid location to live in, you’ll want to move to a location along the Southeastern portion of the U.S. On the other hand, if you can’t stand humidity and want something much dryer, you’re best suited to move inland, aiming for western states like Arizona or Colorado.

What Does High Humidity Even Mean?

Humidity is the measure of the amount of water vapor within the air. There are several kinds of humidity, such as absolute and specific, but relative humidity is the most common, often referenced in weather reports. This humidity measurement tracks the current level of water vapor in the air compared to the maximum amount of moisture the current temperature can hold. Air can only hold so much moisture depending on its current temperature, so if it is 86°F outside, it can only hold about 30 grams of water vapor per cubic meter.

How Does Humidity Affect Mold Growth?

What Areas in the U.S. Are Most Humid?

The most humid location in the U.S. is the Southeastern Coastal Plain along the Gulf of Mexico. Other locations, specifically along the Northwest Coast, also have high humidity.

Is Humidity Worse in Texas or Florida?

It depends on how you want to look at it. Texas holds five spots in the top 10 most humid cities, while Florida only holds one, so Texas possesses more cities with extreme humidity. But, if you look further out to the top 20 or 30 cities, Florida has more overall entries than Texas. So, Florida has more locations with high humidity, but Texas has the most locations with the highest intensity of humidity.

Where Is the Most Humid Place To Live?

The most humid city in the United States is Lake Charles, LA. But, Jackson, MI, Meridian, MI, Brownsville, TX, and Port Arthur, TX, also have humidity that rivals Lake Charles.

To find the most and least humid cities, we analyzed weather data from the NOAA. We analyzed data for 251 cities throughout the United States. We used data on the average annual humidity data for mornings, using the most recent 2021 and 2022 data. This annual average data accounts for changes in months and seasons. 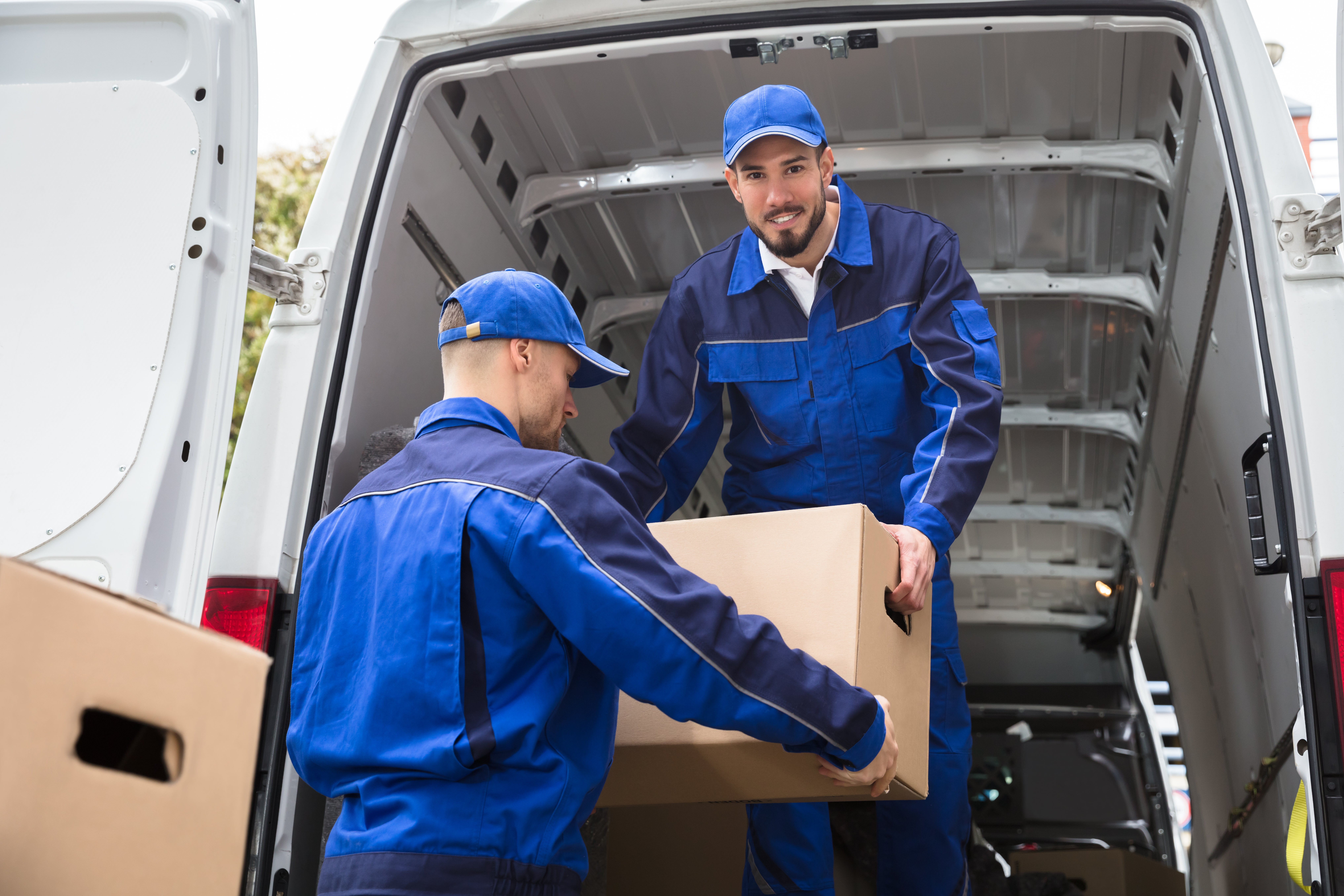 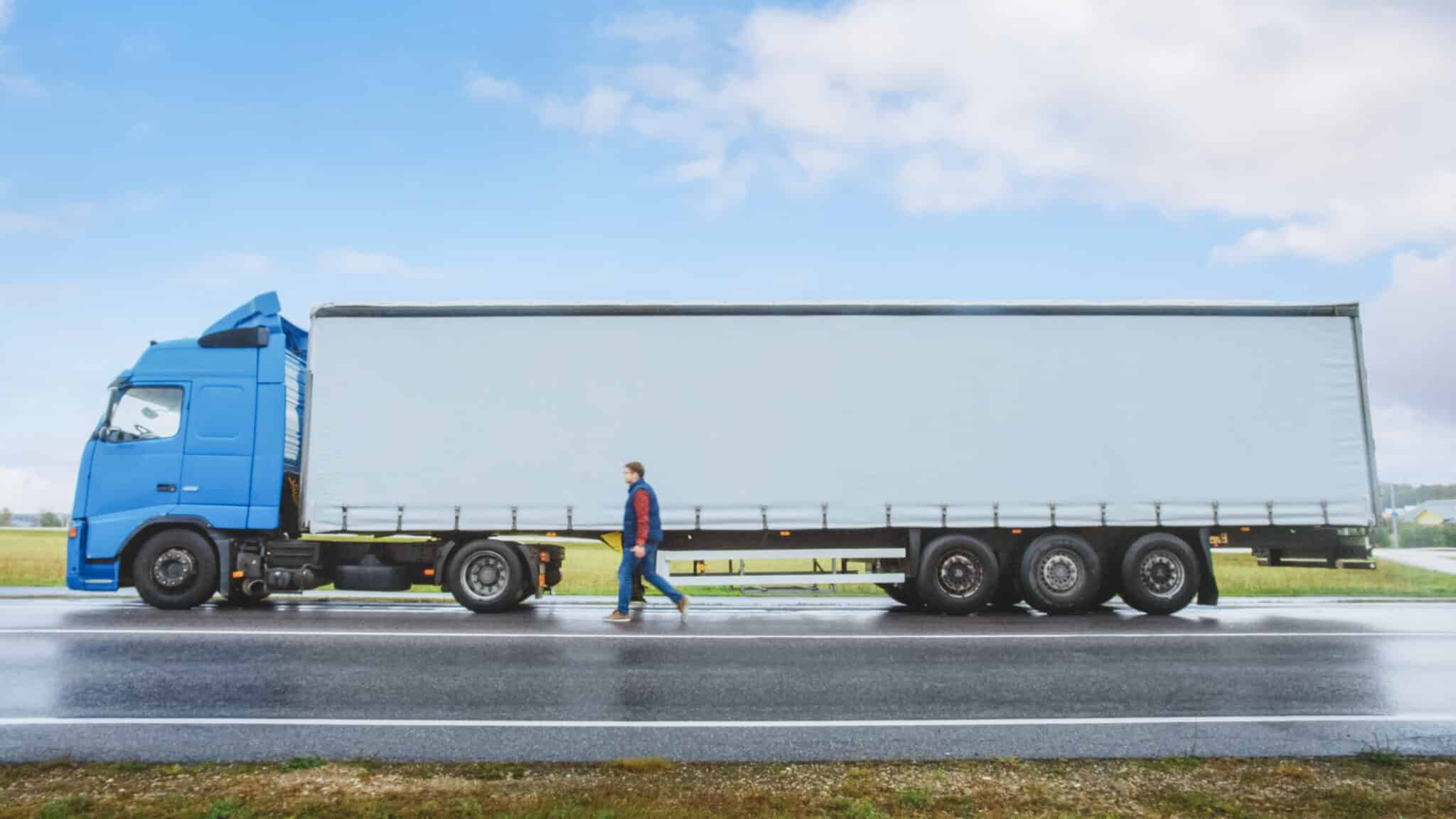 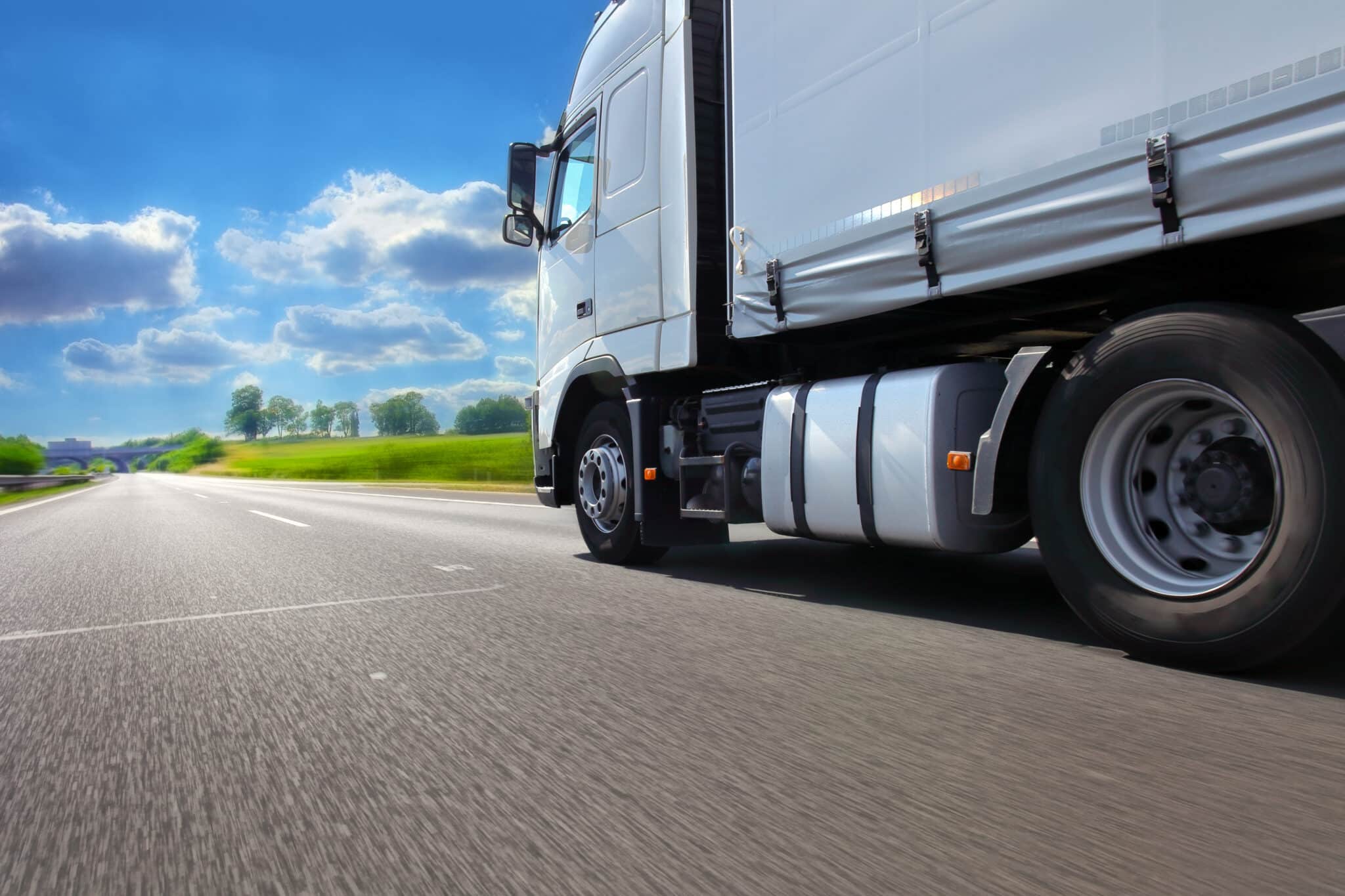 DIY moves can be challenging, but budgeting for one doesn't have to be. Read our review of the cheapest rental truck options for your upcoming move. 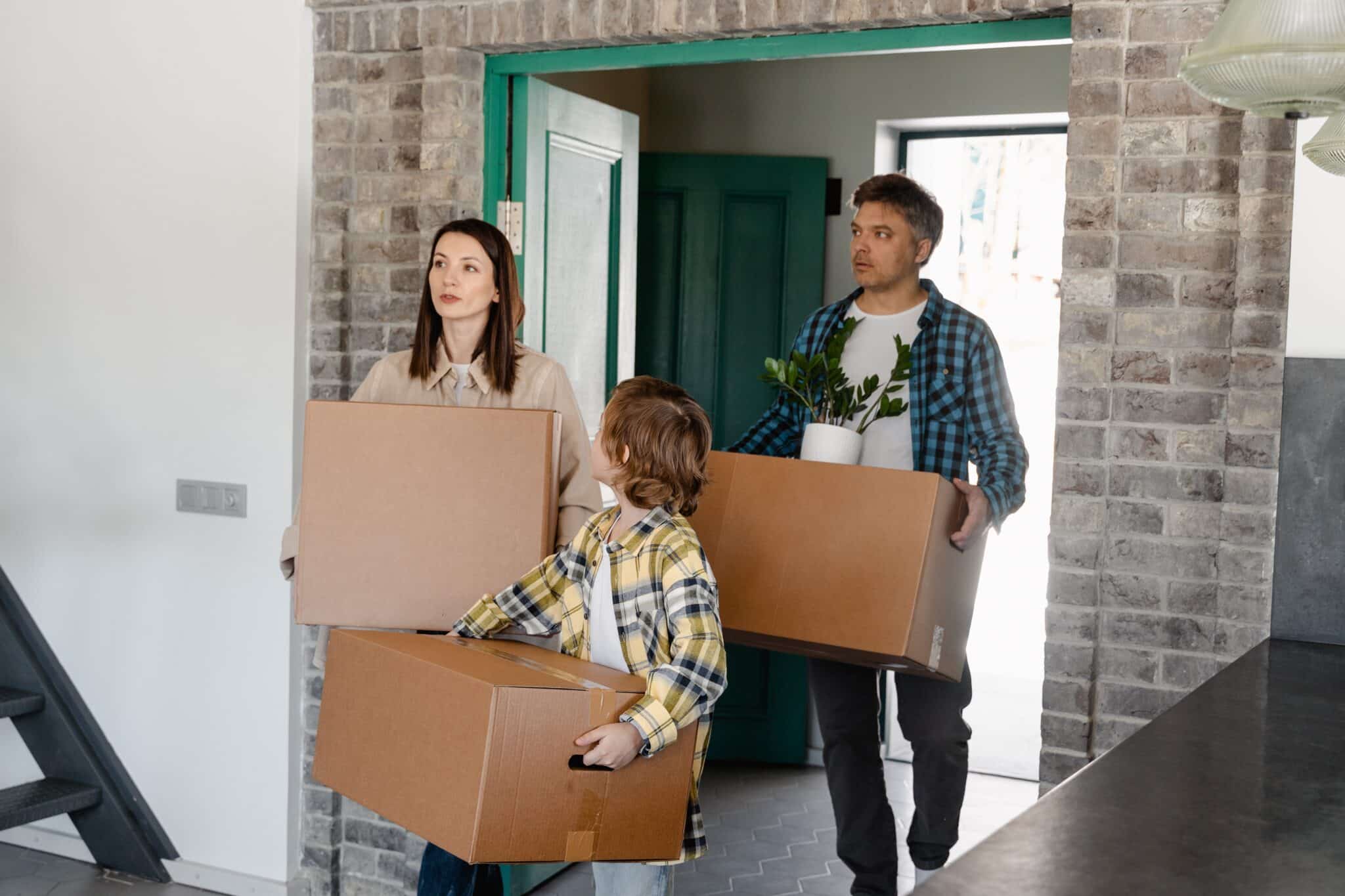 Any move can be stressful and difficult to budget for. Here, we've broken down the best moving companies in Texas to ease all aspects of planning a relocation. 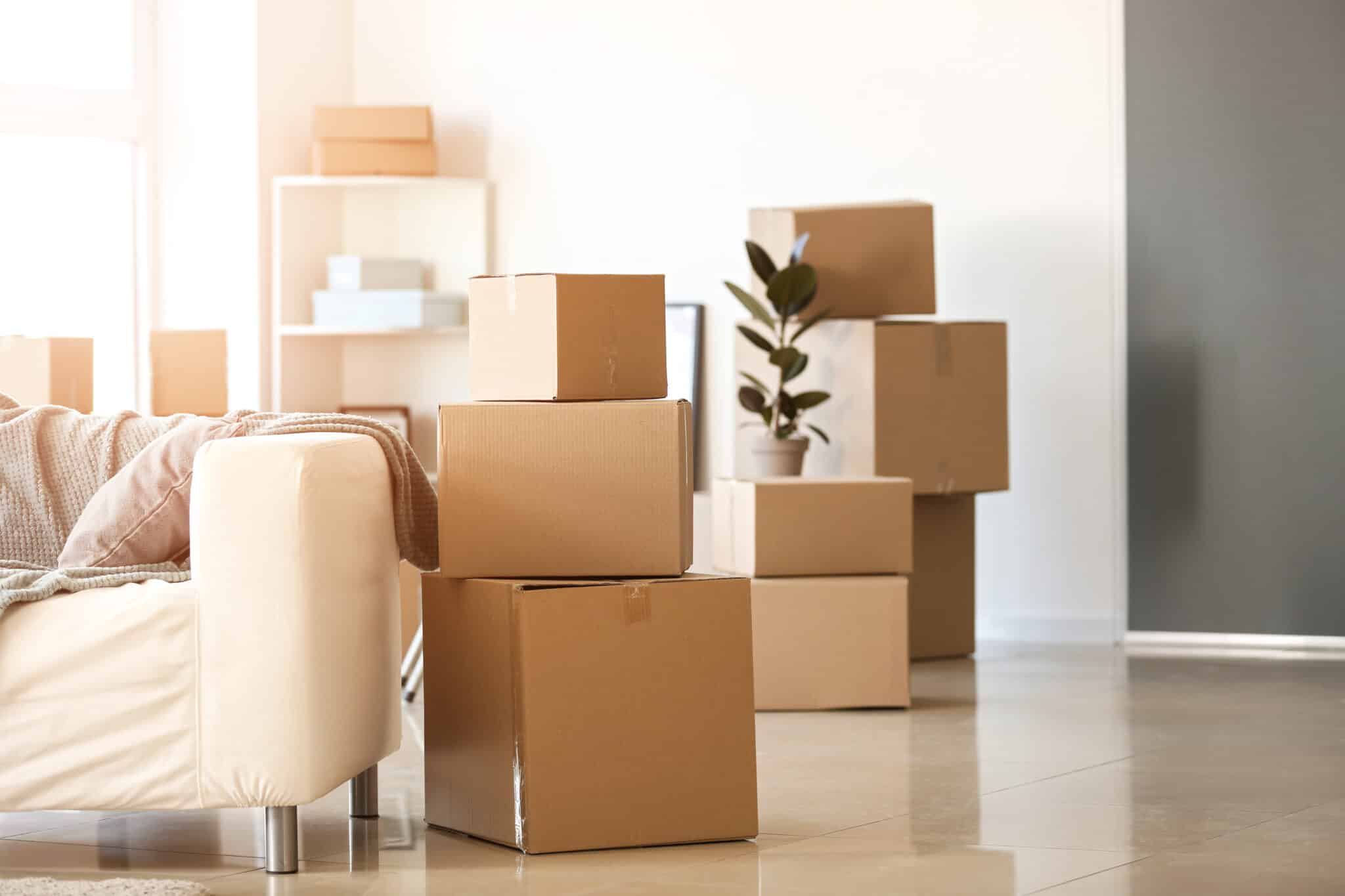 Looking to relocate to Hawaii? Check out our top moving companies to figure out the best provider for your move. The planning of your Golden State move is sure to keep you busy. We've reviewed the best California moving companies to make this phase far easier.

Looking at International Van Lines to help with your move? Check out our review to find out all you need to know and price and booking. 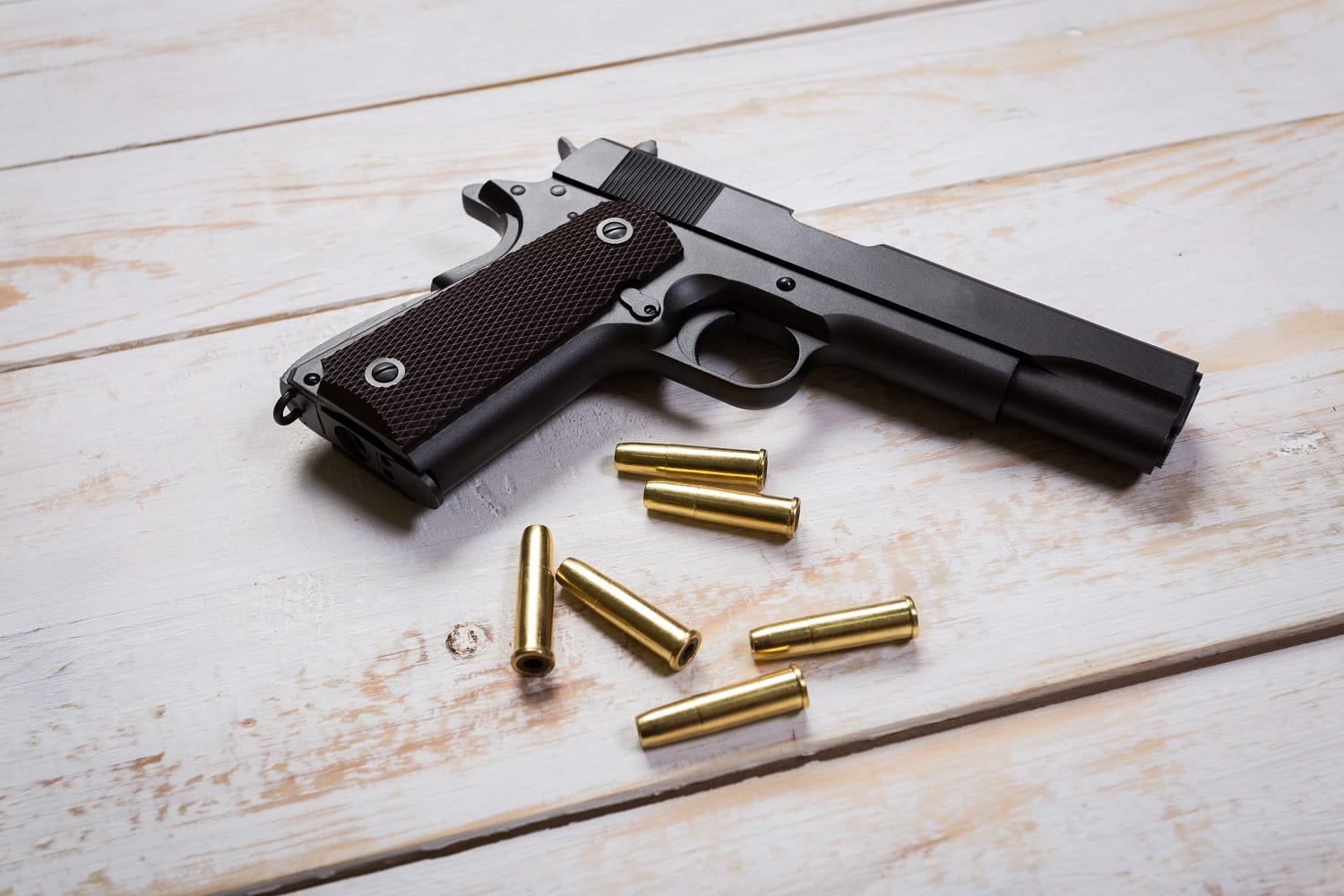 Moving a gun safe can require special equipment. We break down the best gun safe movers in your area.

The Best Moving Companies of 2022