We analyze consumer reviews to find the best products on the web. We buy products with our own money and test them in our lab. We also interview experts and conduct independent research to pick the winners. We have affiliate partnerships so we may get a share of revenue from purchases. It’s how we fund our Research Lab and bring you better reviews and comparisons. Read more. 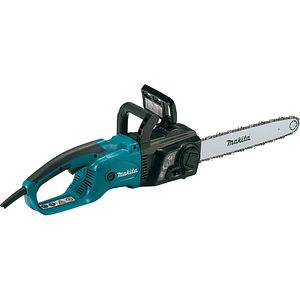 Check Price at: 1 store
Easily assembled and started this model efficiently cuts 12-14" diameter trees and branches.
Easy to put together out of the box and works the way it's supposed to. Strong consistent results.
Like many saws, this one leaks oil out of the reservoir.

Check Price at: 1 store
Very easy and lightweight chainsaw to use, with lots of power.
Fully assembled out of the box. All you do is fill the oil reservoir, plug it in, and start cutting.
Gravity-fed self-oiling mechanism can be problematic. If the saw isn't oriented properly, the oil won't flow and your chain will be left high and dry.
Best Value 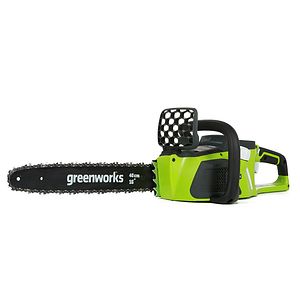 Check Price at: 1 store
Long life-span battery-powered electric chainsaw that can be used anywhere. With a 16" bar, this is a hefty, full-powered saw.
The chain can be adjusted without the use of tools. Plus, you don't have to worry about getting tangled in power cords, and it's exceptionally quiet.
When stored with oil in the reservoir, it leaks. Either empty the oil before storing or put it in a leak-proof container. 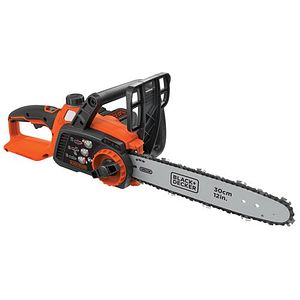 Check Price at: 1 store
Comes with a 12" bar, automatic oiling system, tool-free tensioning system, and a 40V 2 Amp battery that will deliver over 60 cuts on 4x4's.
Easy to disassemble for cleaning and maintenance, very lightweight, and easy to use. It can cut down 12-14" trees without any problems, and clearing undergrowth is effortless.
Consumes too much oil during operation. You'll need to buy extra to keep the chain and bar properly oiled and cleaned.

Chainsaws are hardcore tools for outdoor work. As such, they need to be sturdy, reliable, and able to withstand years of punishment out in the elements. Whether you’re cutting firewood, clearing a trail, or cleaning up storm damage, your chainsaw needs to work as hard as you do.

There are so many different models on the market today that it’s a full-time job sifting through all the competing claims and reviews. We’ve collected data on the five best electric chainsaws available, analyzed their performance, and prepared this report to take all the guesswork out of it for you.

A chainsaw is a handheld power tool designed to rapidly pull a series of sharp cutters across a piece of wood. The cutters are linked together in a chain, with spacers between each cutter. The chain runs along a groove in the edge of a metal bar, or blade. As the chain runs along the bottom edge of the bar the engine is pulling it toward the operator, cutting into the wood and pulling the chainsaw down during the cutting process.

Metal sliding on metal creates tremendous friction, which in turn generates a great deal of heat. Oil is constantly needed to reduce the friction between the bar and the chain to keep them from overheating and warping. As a result, chainsaws are known for using large quantities of oil.

Chainsaws need oil in order to operate correctly, so all chainsaws have a reservoir to oil the chain as it rotates around the bar, or “blade”, as it’s sometimes called. Many chainsaws have an automatic oiling feature that emits measured amounts of oil at regular intervals. These are usually the least well-designed part of any chainsaw, which means oil leaks are endemic to these tools. 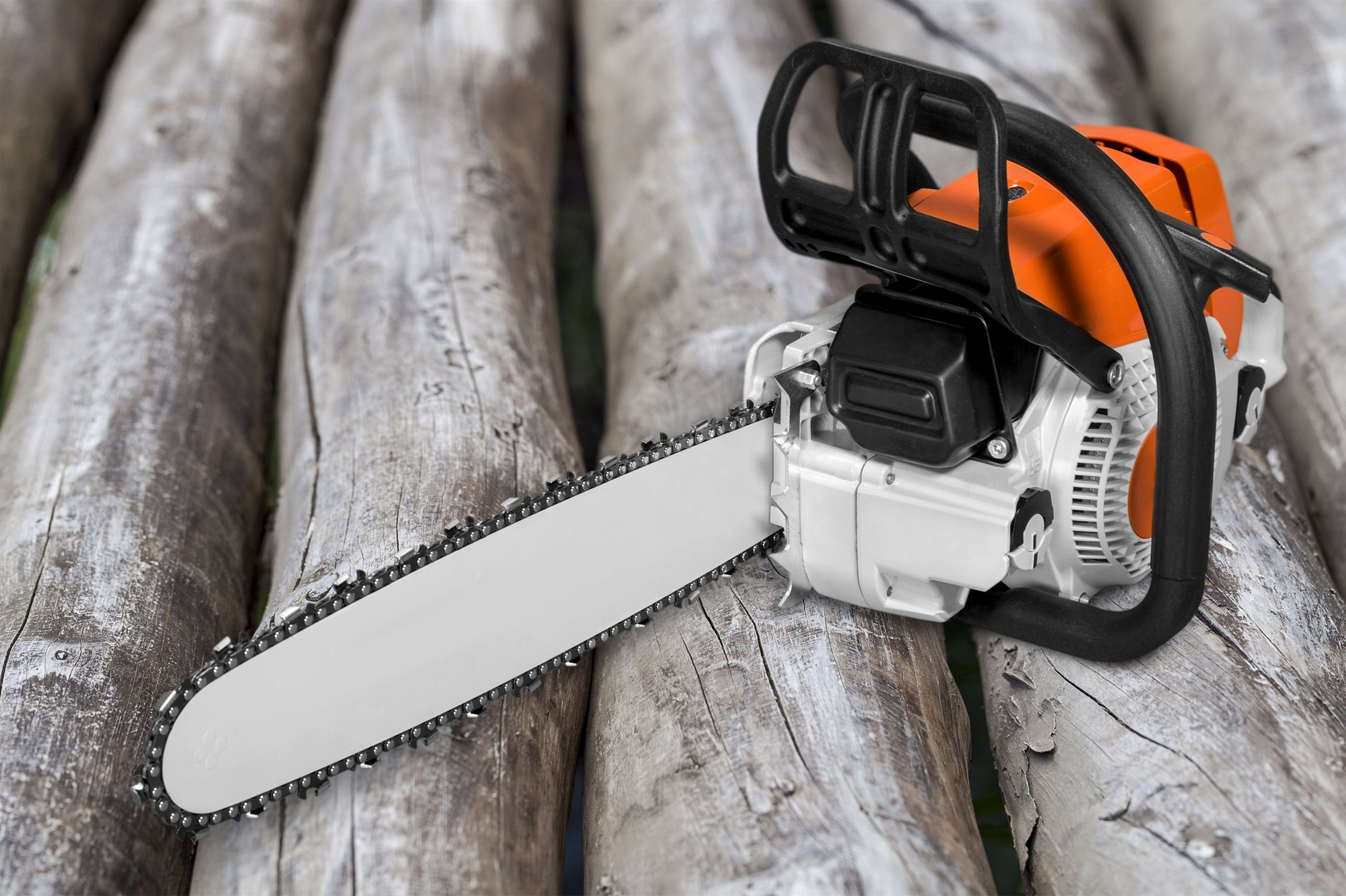 When using a chainsaw exercise caution. Chainsaw safety chaps–made of rugged materials to protect your legs and groin from being cut by the chainsaw blade–are advisable anytime you're using a chainsaw.”

There are two major types of chainsaws; gas and electric. The electric type subdivides into corded or battery-powered.

Today's electric chainsaws are stronger than the gas-powered chainsaws 20 years ago.” 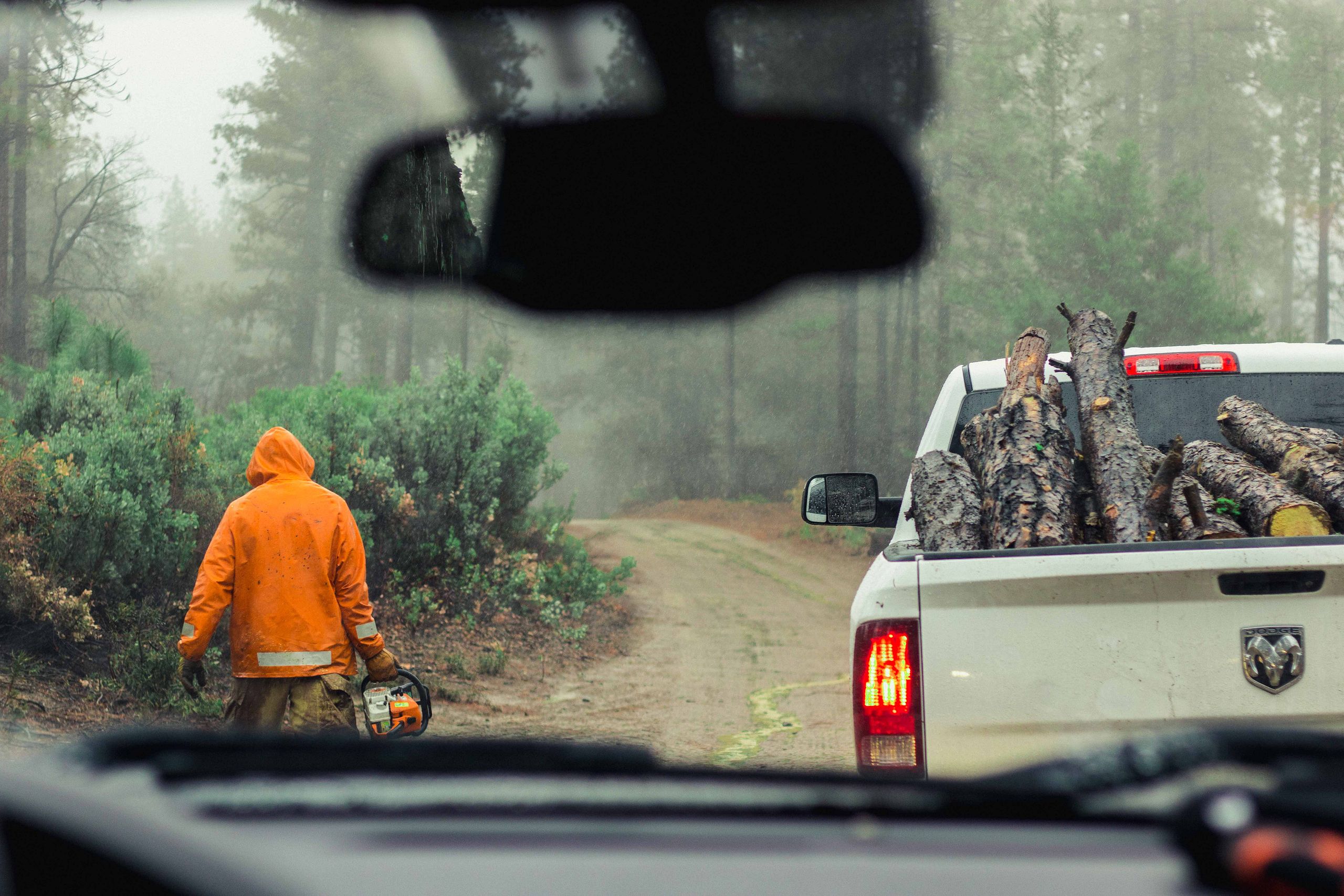 The bar on a chainsaw is the flat metal blade that sticks out from the engine. The chain runs around the edge of the bar, which is fastened inside the housing with one or more bolts. Also known as the blade, the length of the bar is an indicator of the size and power of the chainsaw.

A chain guard is simply a shield to protect the operator from the moving chain in case the operator’s hand or arm slips or accidentally moves toward the chain. This is especially likely when kickback occurs during cutting.

Torque is the amount of force that will cause an object to rotate on an axis, so the more torque, the faster the chain will spin. Obviously, a chain that moves faster will cut quicker, so torque is an extremely important measure of how much power a chainsaw has.

According to a National Institute of Health report, there are over 28,000 chainsaw accidents every year in the United States. ” 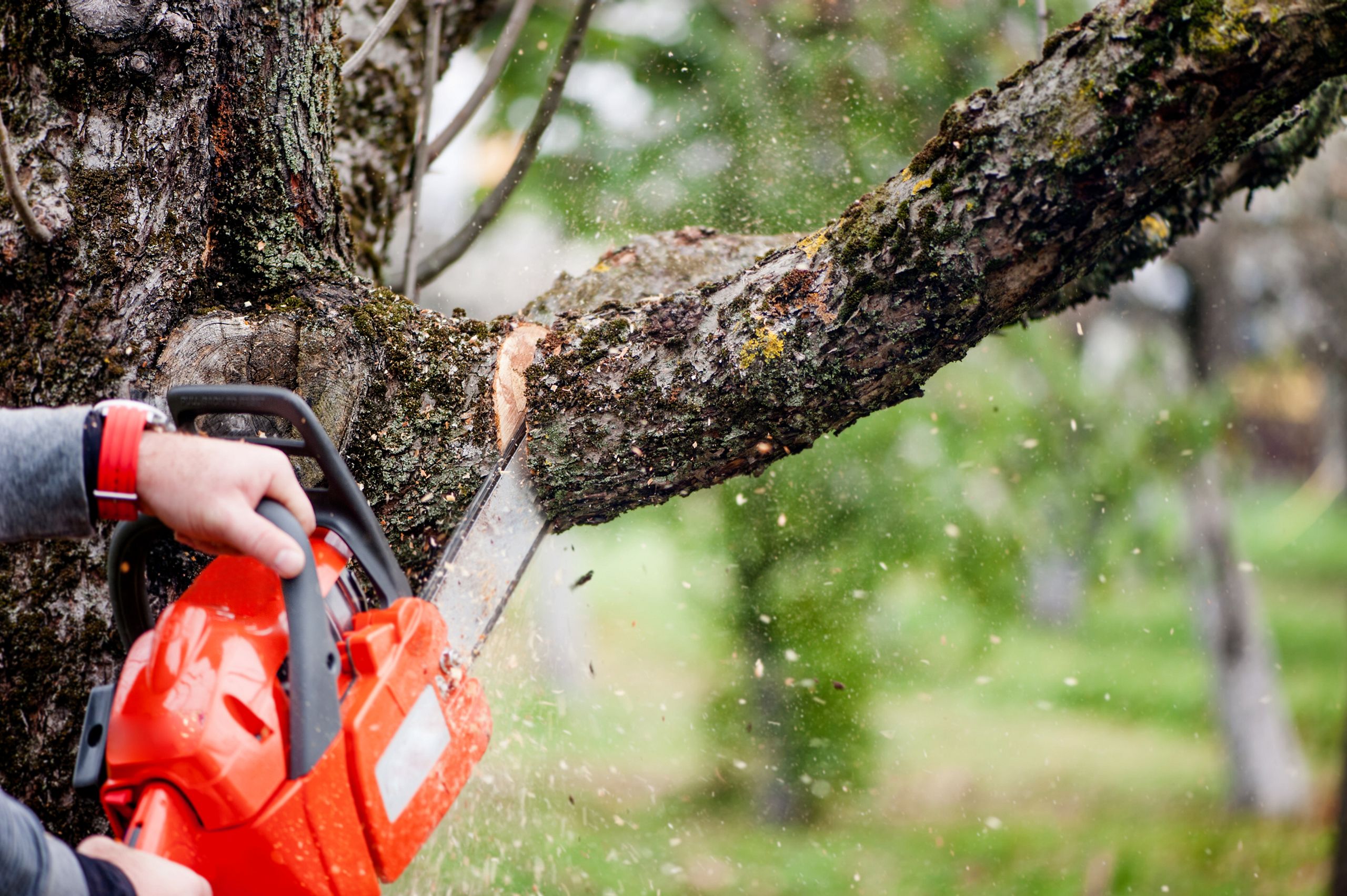 Always cut down on the wood you’re cutting. This is the only safe method of cutting with a chainsaw. Cutting up, from beneath a branch or limb throws chips back in your face. It also exposes you to the danger of the chainsaw jumping at you when the cut is finished.

Cutting from the bottom of a large branch can also lead to “binding” as the weight of the branch forces the cut you’re making to close around the bar. Once a sufficiently large branch or log has caught the bar of your chainsaw, freeing it is difficult.

Electric chainsaws pull a lot of power and an underrated cord can melt the casing around the wire, creating a safety hazard.oil”

Corded electric chainsaws can range in price from less than $80 to around $240, while battery powered chainsaws start around $170 or $180. The difference is accounted for by the battery, charger, and additional size needed to accommodate the battery on the body of the chainsaw.

What are the differences between chainsaw sizes?

A larger chainsaw bar requires a longer chain to wrap around it. A longer chain means more teeth on the chain to cut through wood, but each tooth gets used less often because it’s sharing the burden with the others. Very quickly you’ll see a marked increase in cutting power as the length of the bar increases.

Does a longer bar require a bigger engine?

Yes. Chains are made of steel and every increase in length is accompanied by a corresponding increase in weight. Longer bars also mean more resistance and friction to be overcome. Chainsaws use oil in an attempt to overcome friction but it’s always there and you need larger engines to handle the load as the bar gets longer.

Are chainsaws safe around children and pets?

Never. Chainsaws are designed to cut through wood. Human flesh is a lot softer than wood so they are quite dangerous to adults and children alike. Safety is the number one issue around chainsaws, and you should never allow children and pets around these tools when they’re being operated.

Can battery-powered chainsaws use batteries from other products?

Cordless yard tools typically come in families, with all the equipment from a particular manufacturer able to share batteries back and forth. Batteries can be alternated between leaf blowers, weed eaters, hedge trimmers, and other electrical yard tools. As a general rule though, batteries can’t be shared between the tools of different manufacturers.

The team that worked on this review 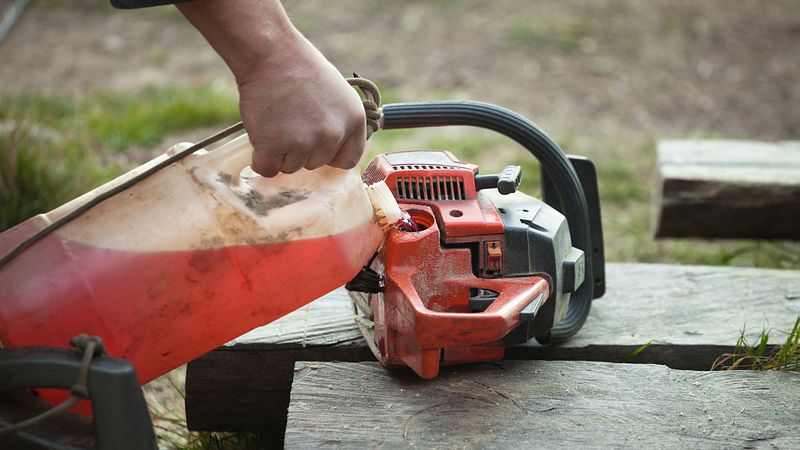 Buying a gas chainsaw is intimidating. We've narrowed down the options for you in this comprehensive buyer's guide. 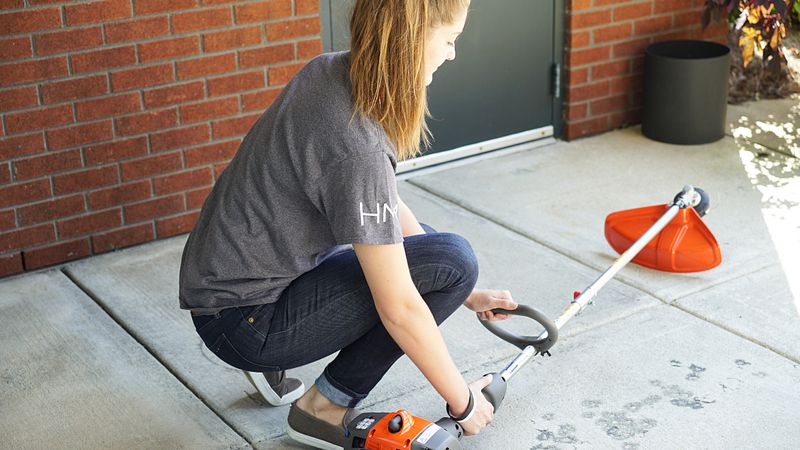 We compared the best weed eaters, including both gas and electric options, so you can get your home projects up and running. 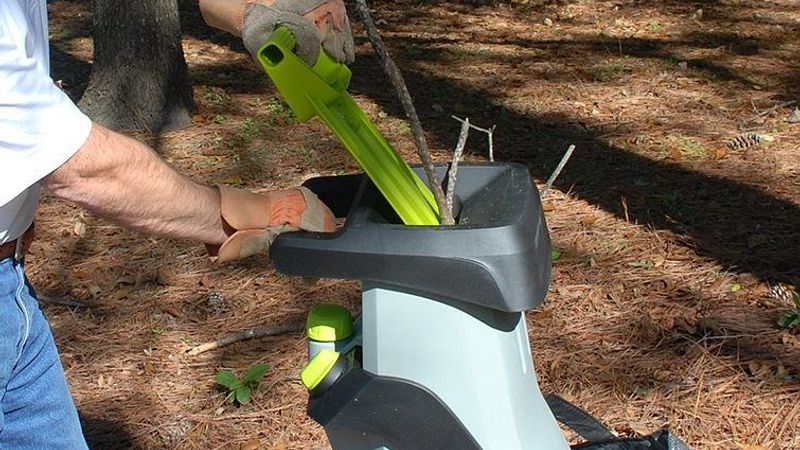 If you’re dealing with plenty of dead branches and leaves, then you may want to consider a good wood chipper: the machine will help you mulch those twigs for easy disposal or use.