A Waterfront Colonial on Cerulean Waters 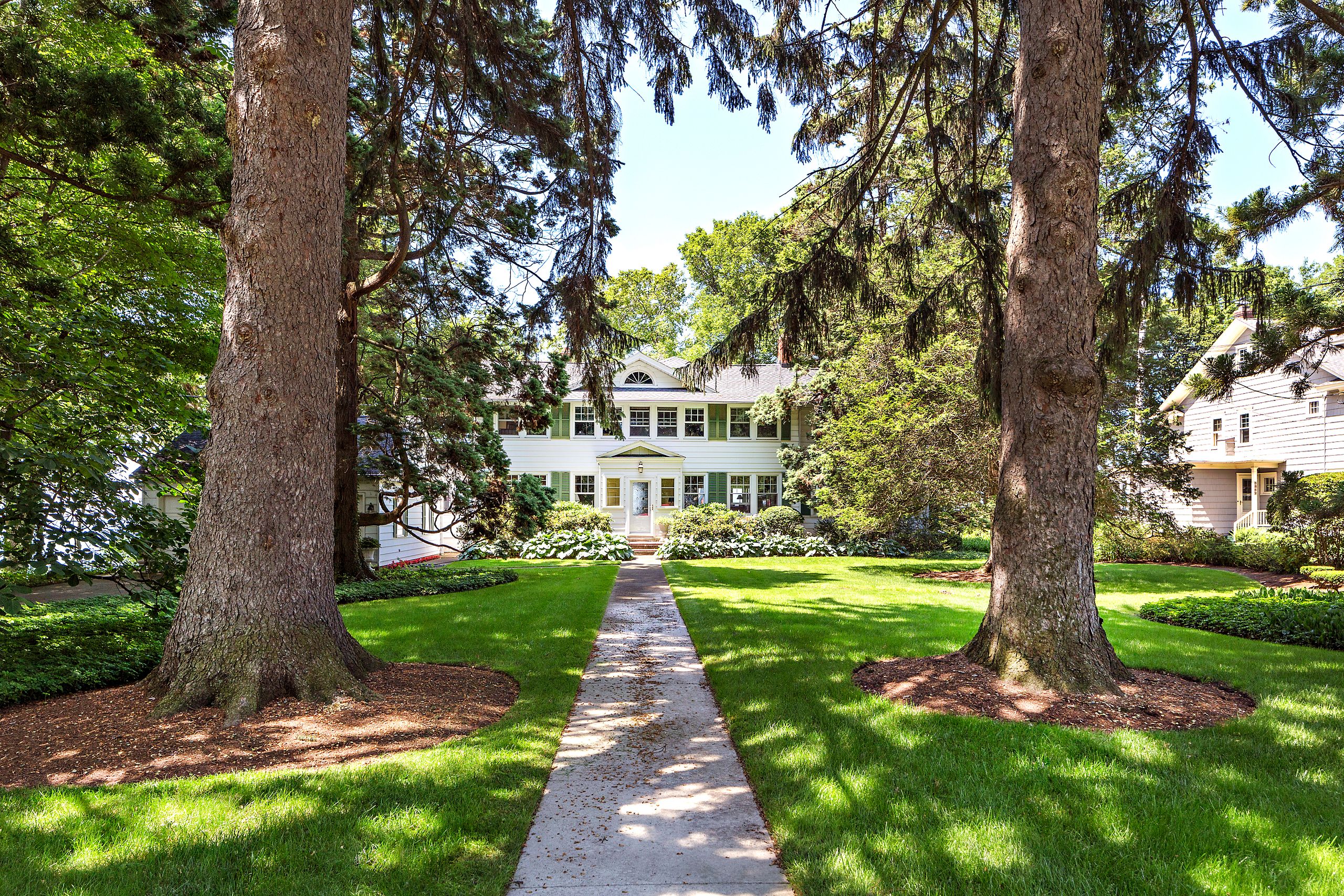 Homeowners Bob and Maureen have lived in their stunning Lake Erie waterfront home for 34 years. This white 1938 Colonial situated on a private beach has been their home to raise five kids (now all grown and scattered coast to coast), their venue for welcoming neighbors, and their setting for spontaneous spreads on their family-size picnic table.

As an Erie native, it had long been Bob’s dream to own property on the water, so when a friend tipped him off to the imminent sale of a charming vacation house on the water nearly four decades ago, Bob scooped it up immediately—unbeknownst, in fact, to his wife Maureen.

At the time, the property had only two bedrooms and two bathrooms, yet the couple already had three young children and a fourth on the way, so they began the process of expanding the home to accommodate their growing family, adding three bedrooms and a bathroom, covering an open-air porch, adding an outdoor patio, and renovating an existing upstairs bathroom.

Thirty-four years later, Maureen is a retired nurse and Bob still works as at attorney at the same firm where he’s been for more than 40 years. And though these two are now empty nesters, their home remains bustling. Grandparents to five with twins arriving later this year, Bob and Maureen continue to fill their five-bedroom home with family and friends joining them for weekend visits, meals on the big picnic table, or a sunset theater on the deck.

Much like the grand face of the home, the interior is awash with shimmering sunlight, the back plated with windows that open the home’s living spaces and bedrooms to the Erie’s sparkling waters. Traditional décor is embellished with antiques and family heirlooms, custom stained glass windows and murals painted by artistic friends, details that evidence a family life beautifully lived. The home embodies a warmth and serenity that only waterfront houses possess, a calm that’s drawn into the home with every beat of the lake’s water.

Approach Bob and Maureen's Colonial-style home—guarded by magnificent evergreens—sits deep within the property, insulated from the noise of passing traffic 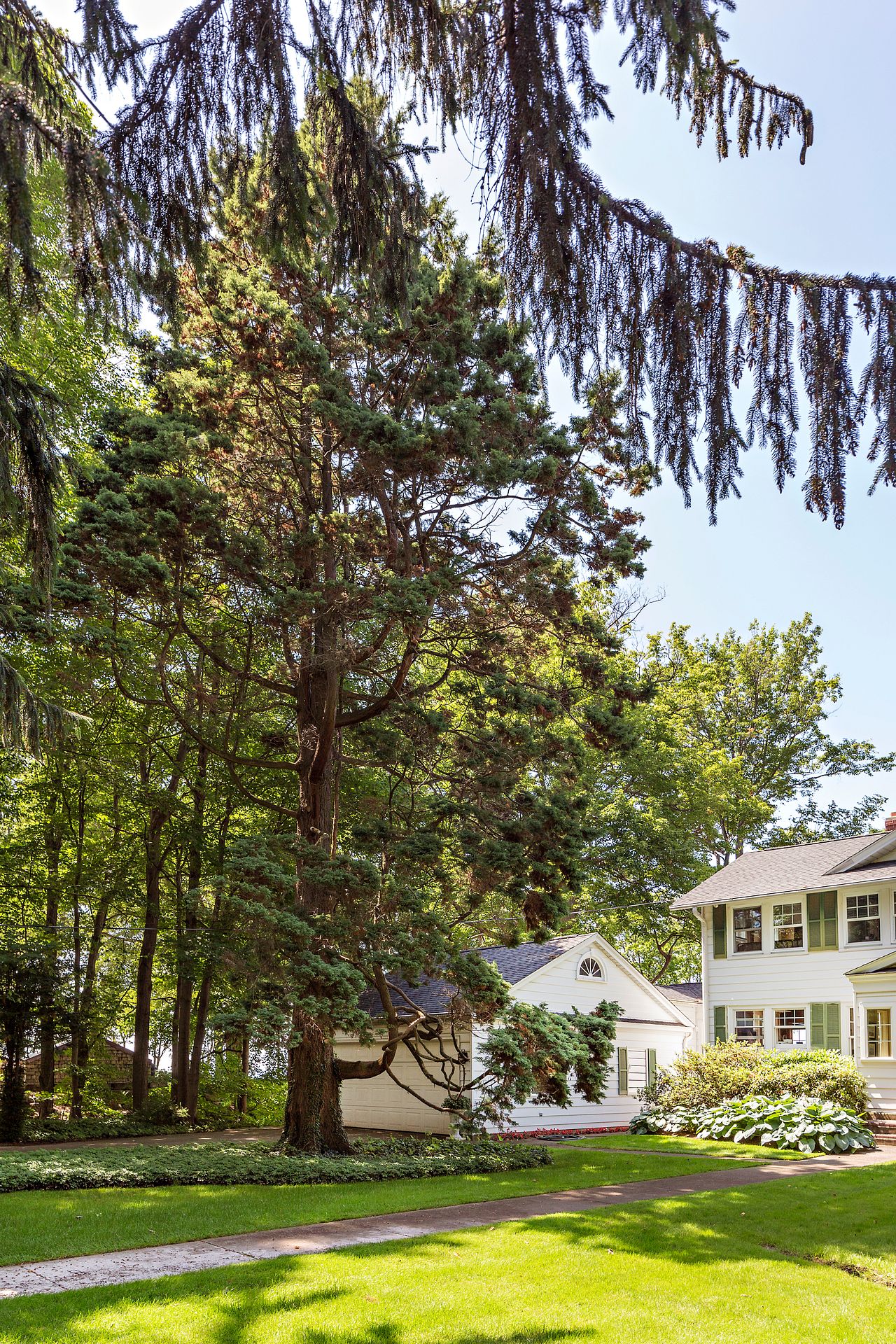 History Pictured here is the oldest cedar tree in Pennsylvania, according to an arborist the couple hired to survey the property 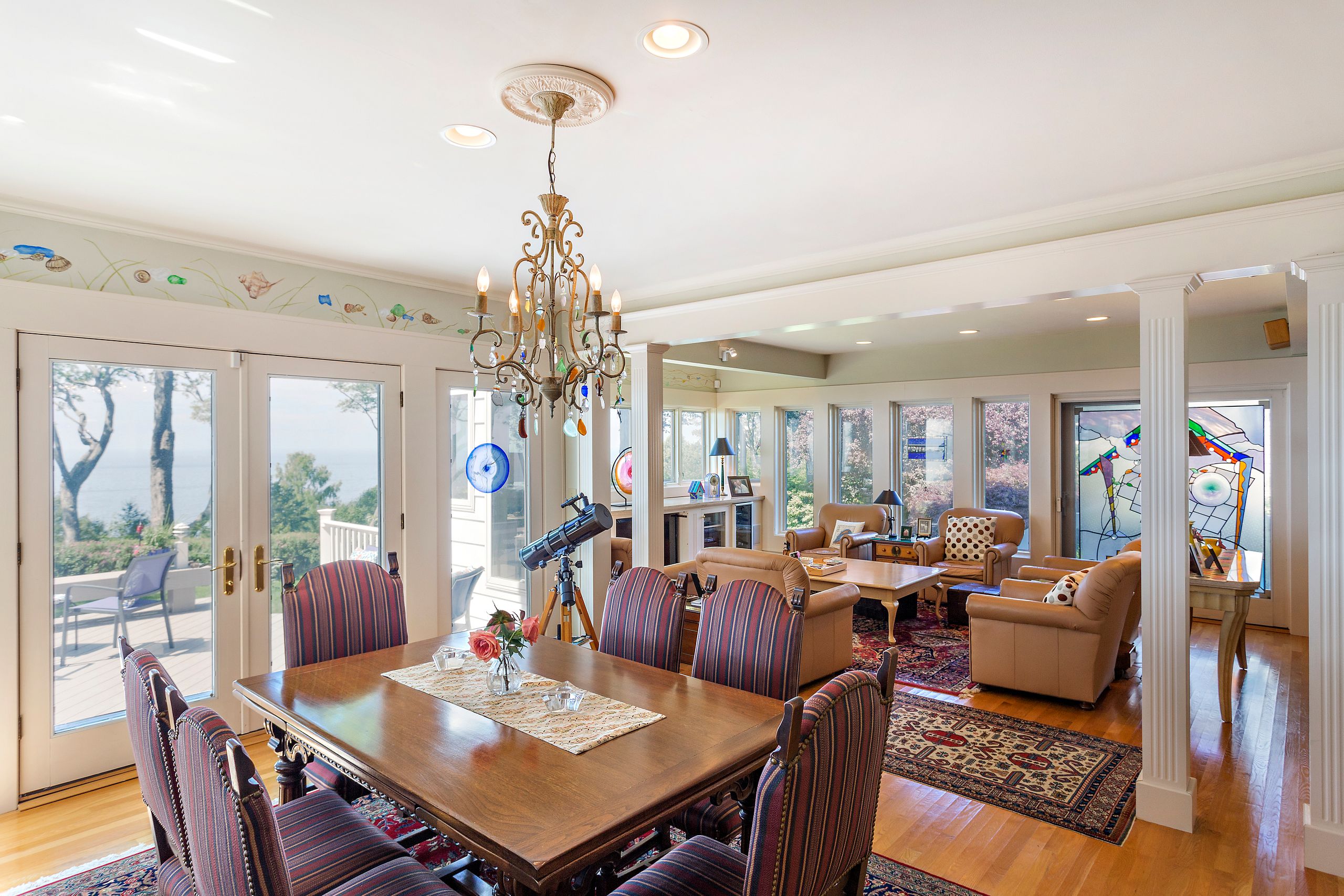 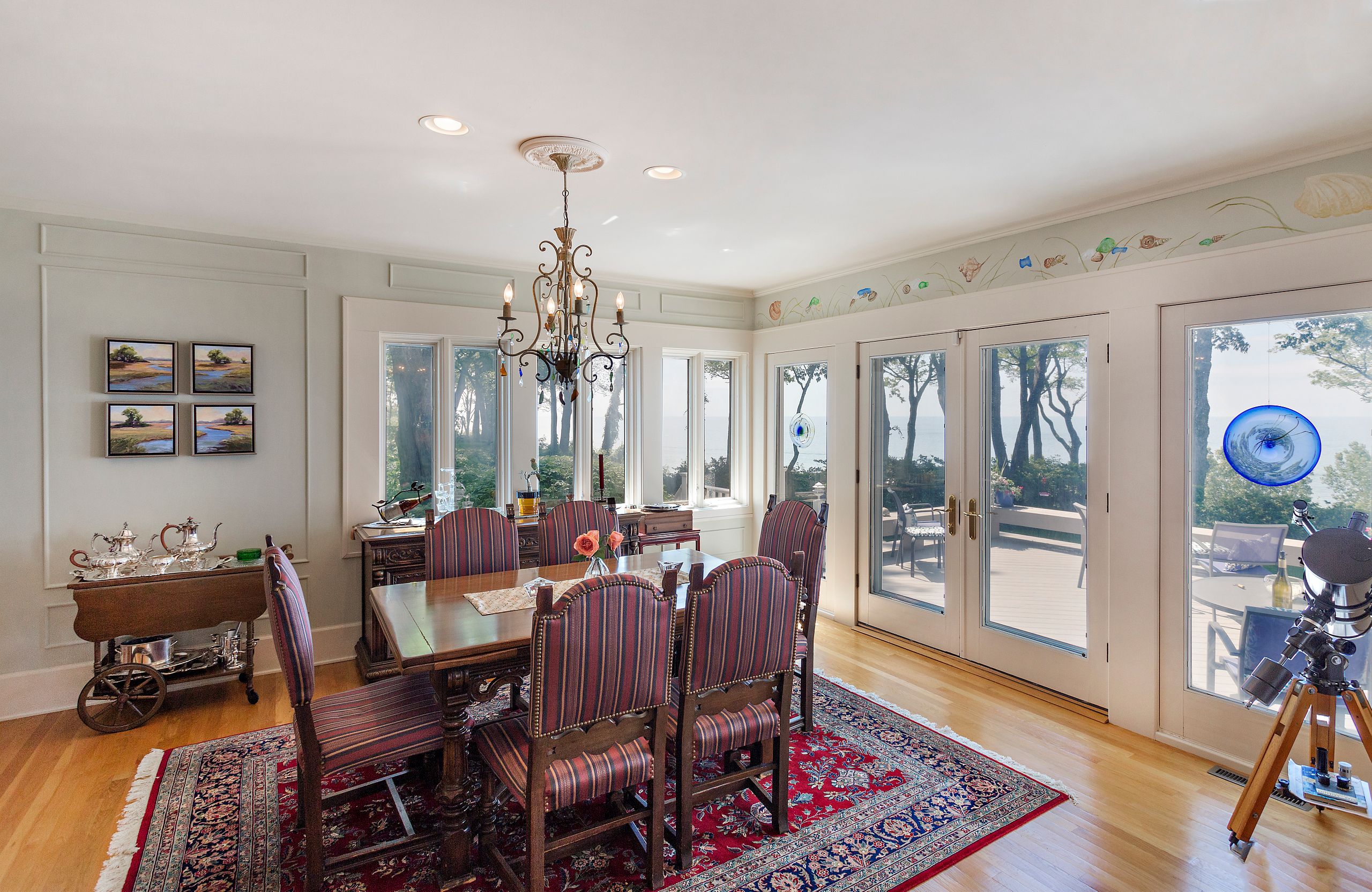 Details Above the silver set in the corner hang paintings of the low country around Hilton Head, SC, a favorite vacation spot for the family 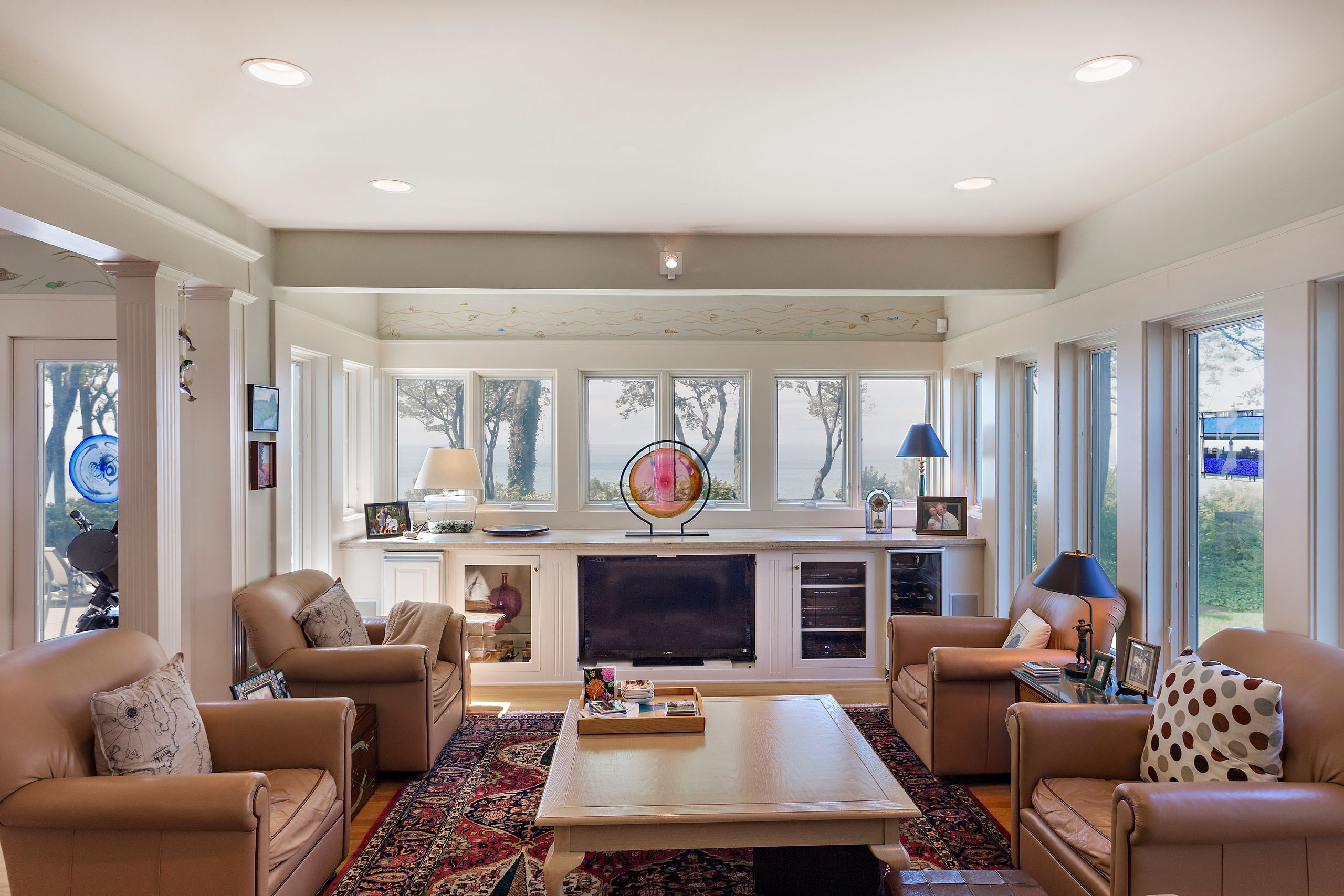 Reno Formerly an open-air porch, the couple converted the space into a family room that preserves the beautiful view 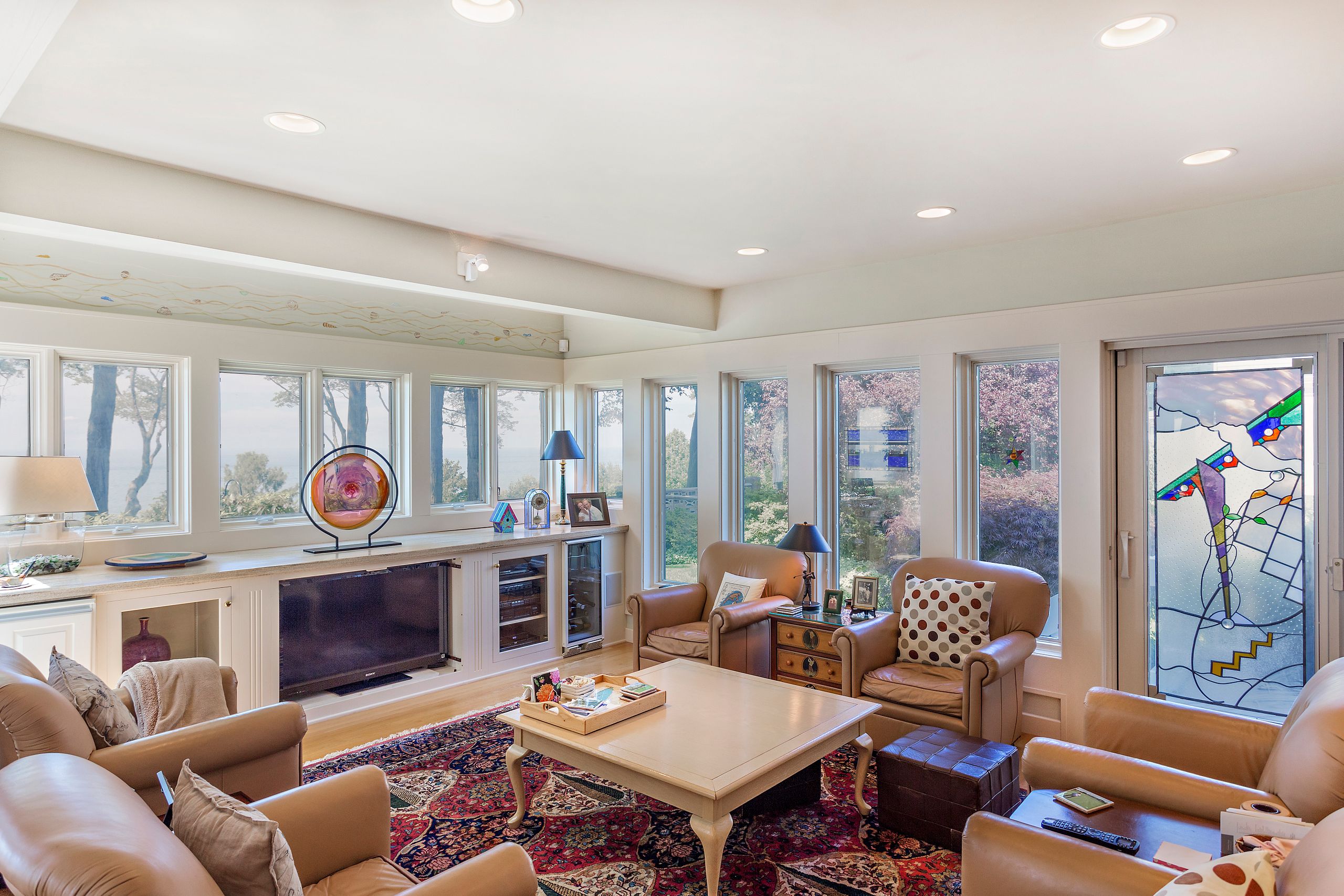 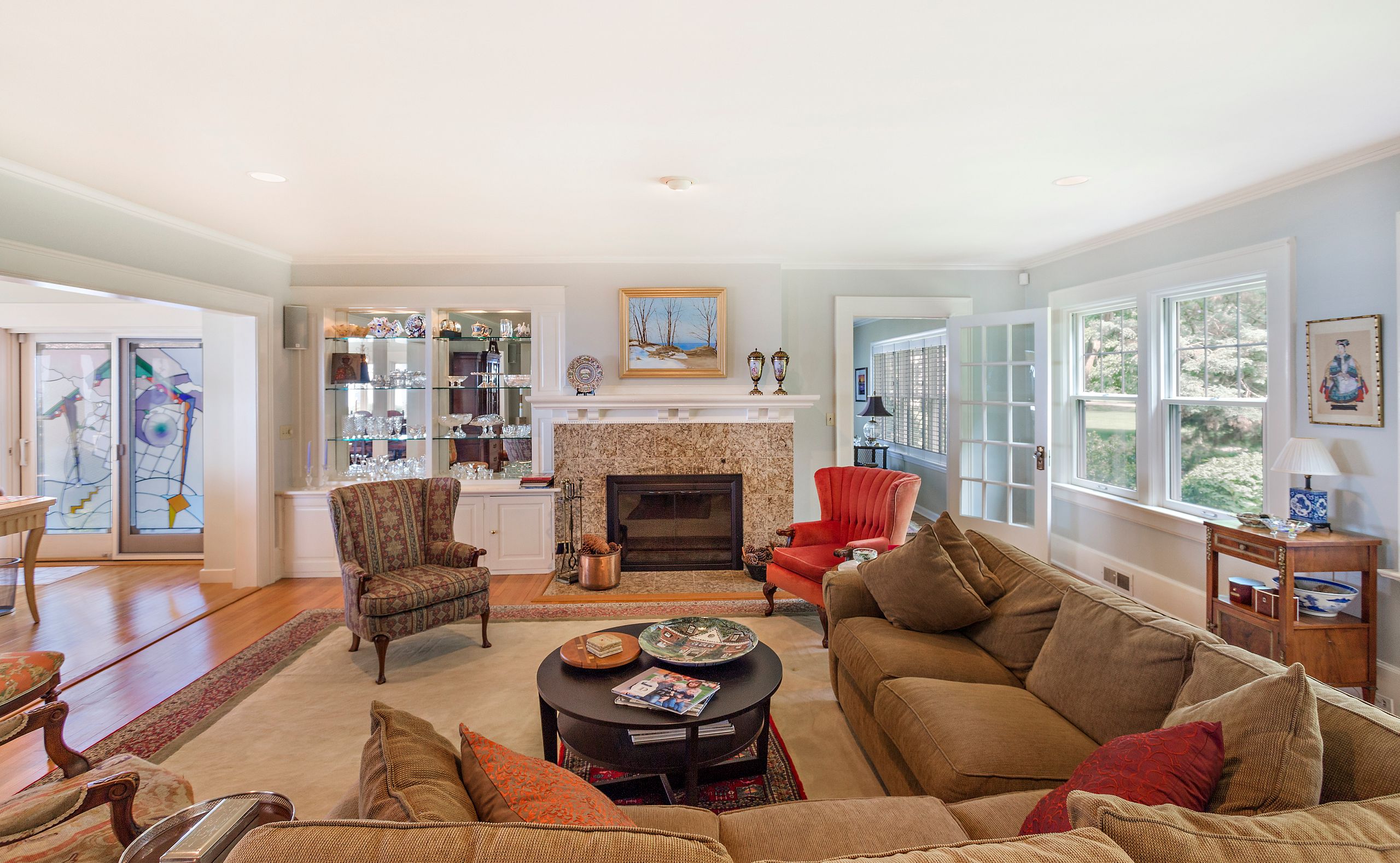 Collections The formal living room, which sits on the front of the home, is filled with heirlooms from Maureen's mother who was an avid antique collector 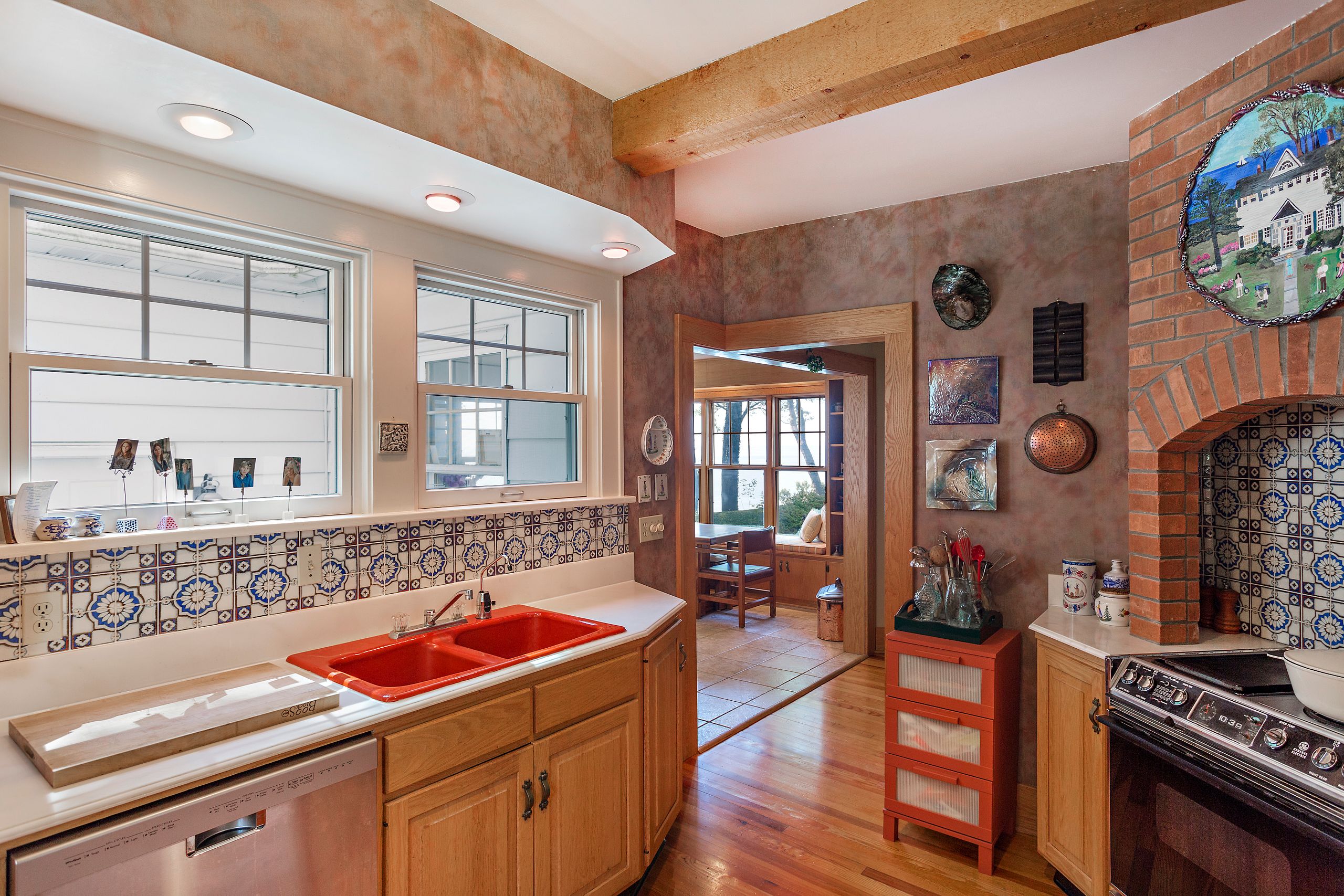 Structure Overhead beams in the kitchen are original to the home 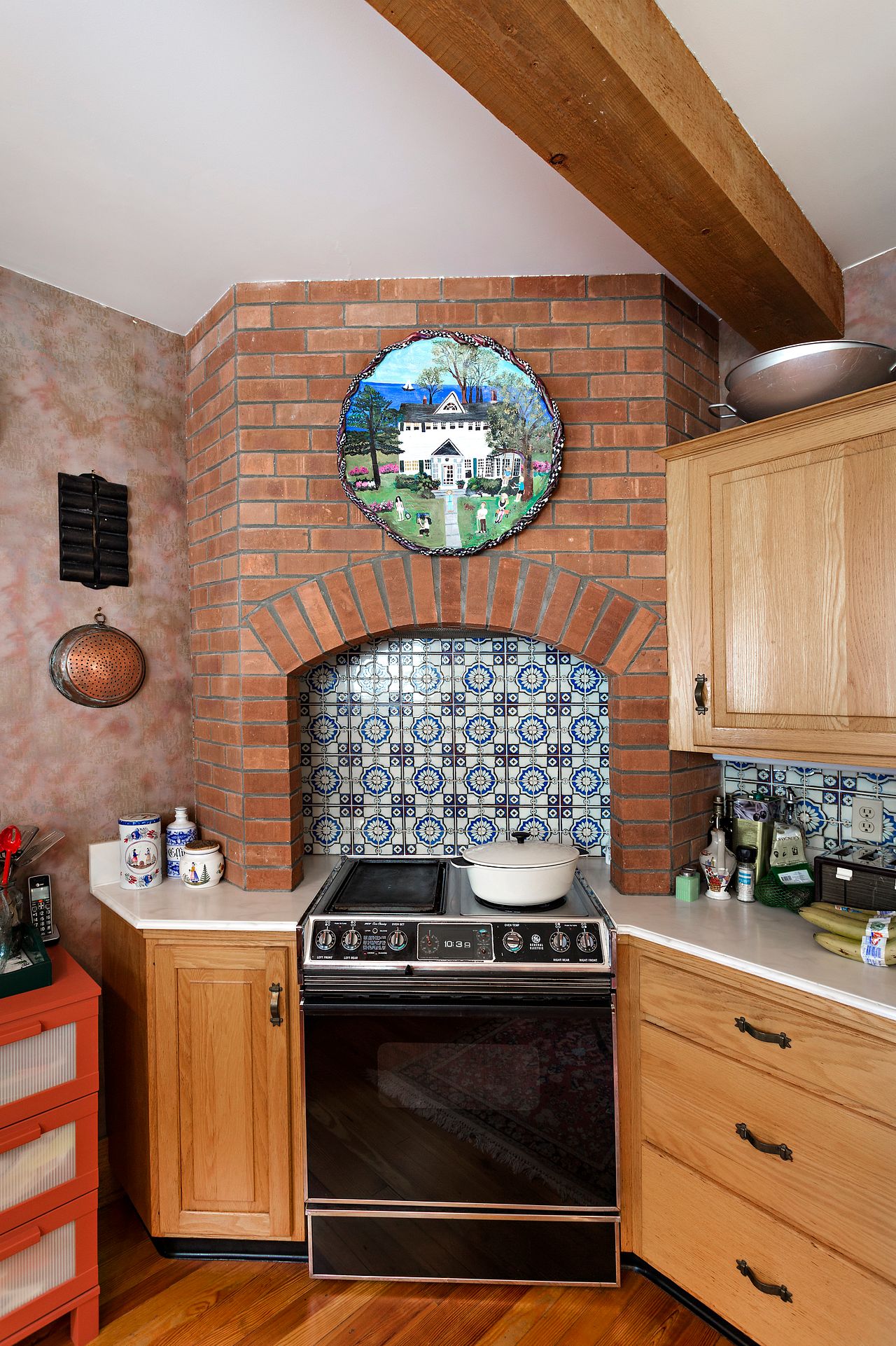 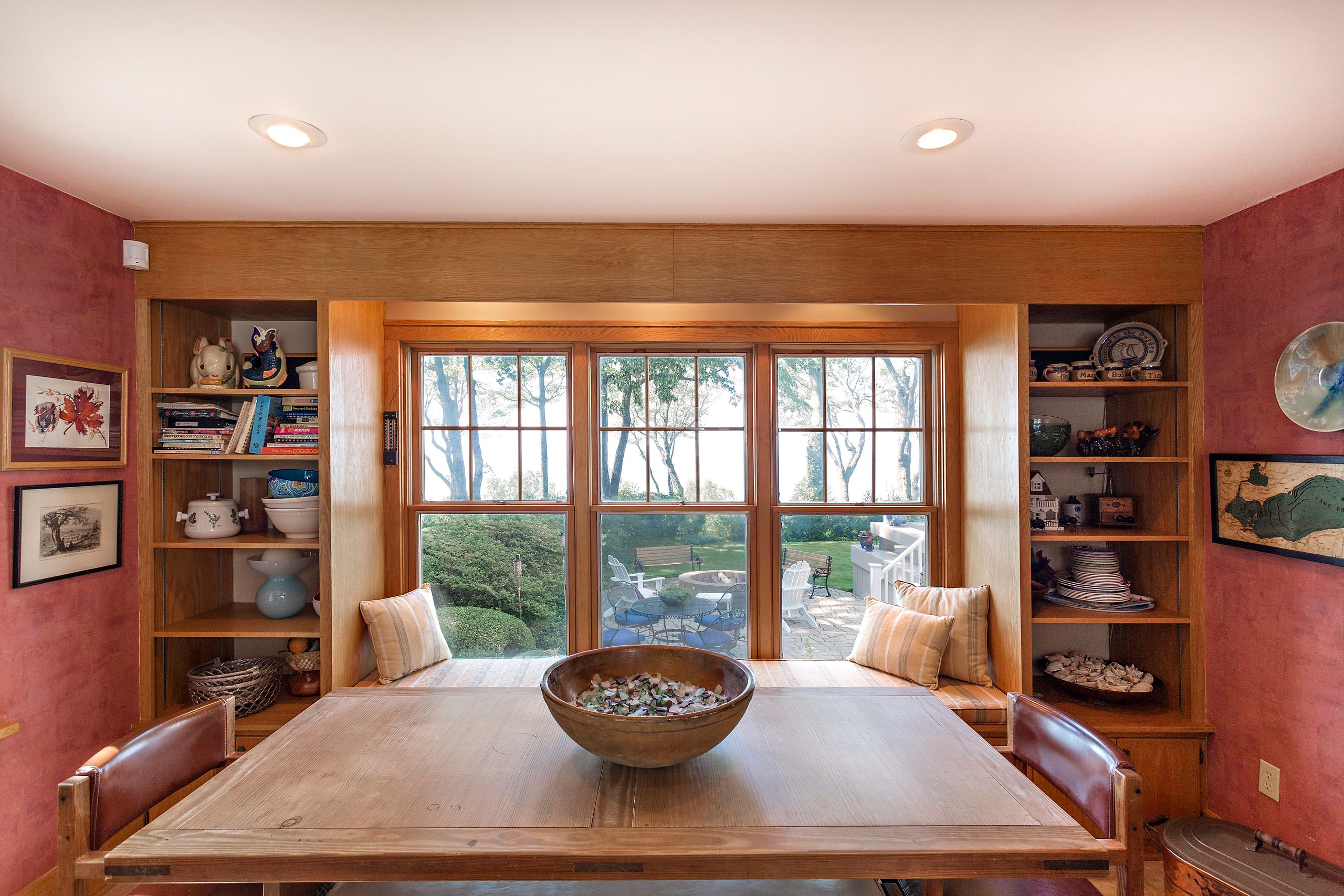 Reno The couple added heated flooring to this breakfast room, which became a favorite of the family Yorkie 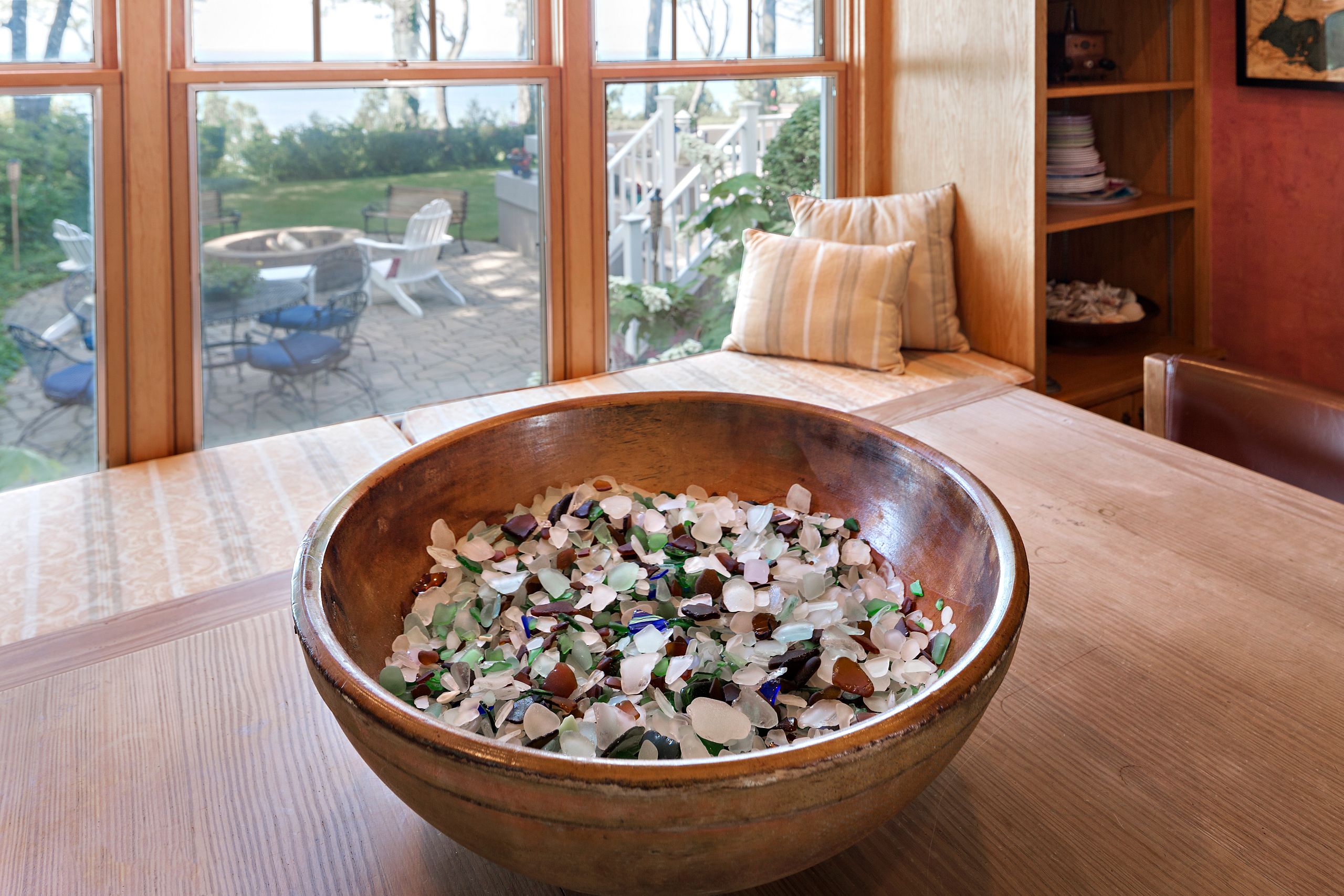 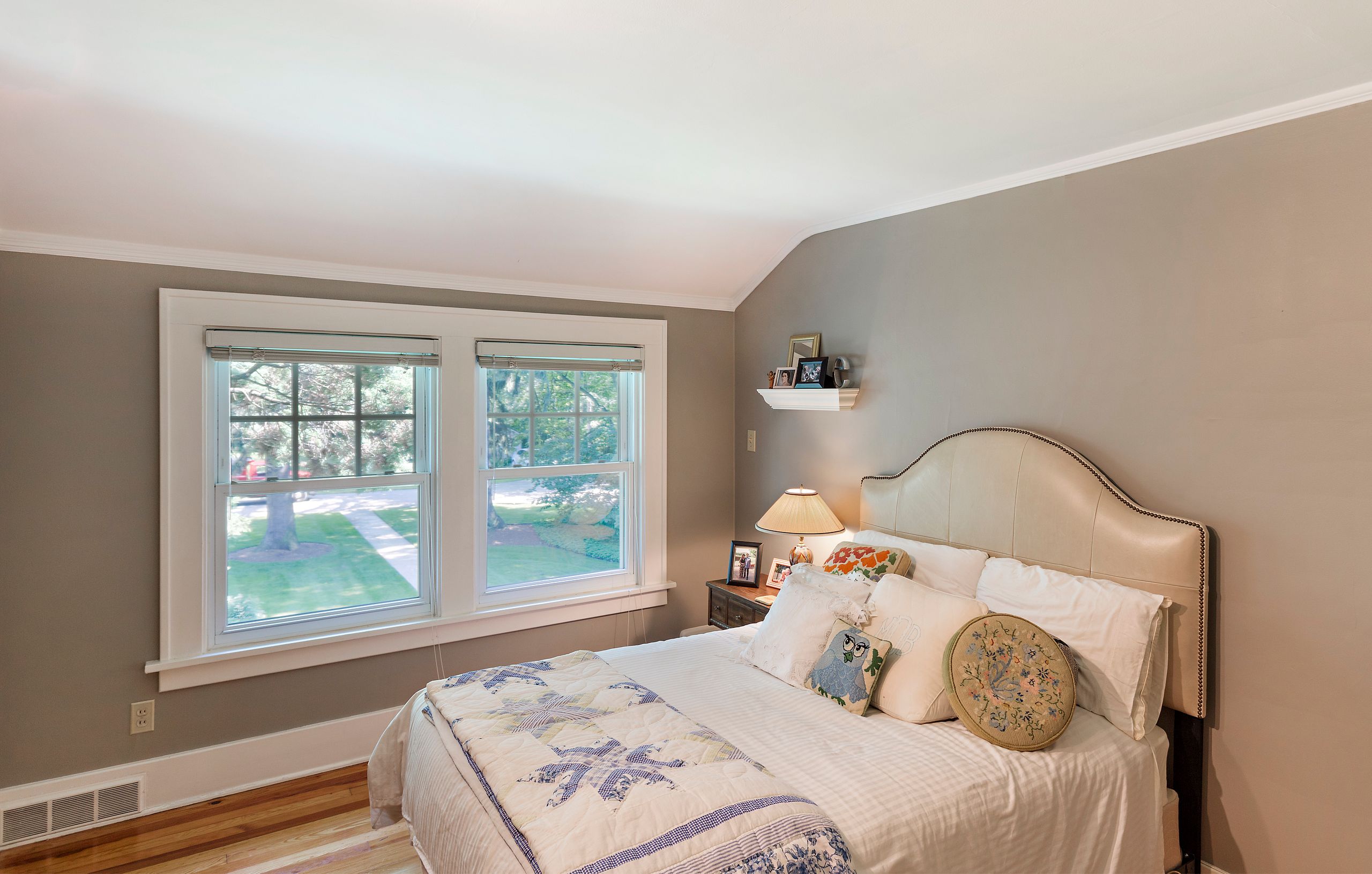 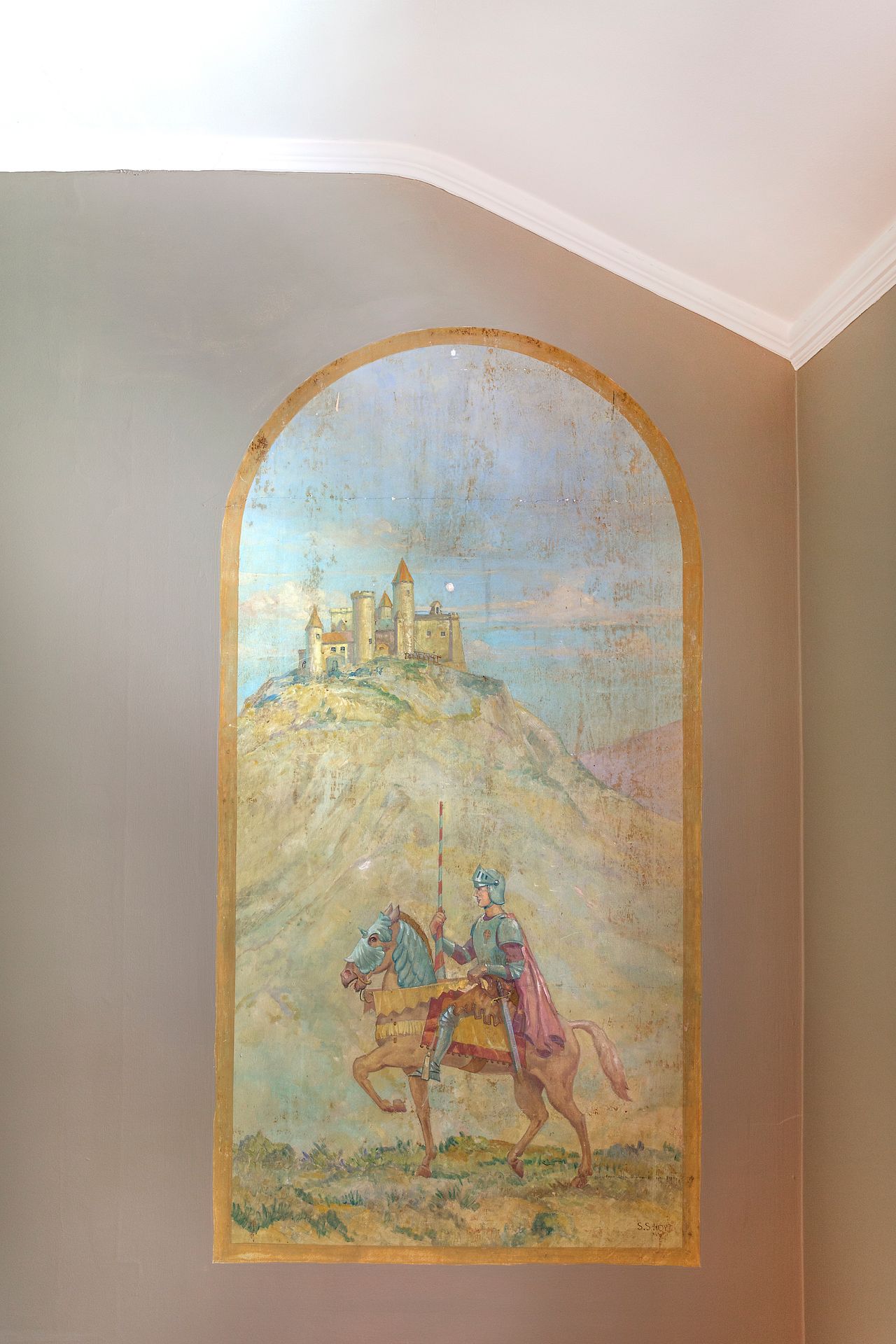 Uncovered mural While removing wallpaper in the guest bedroom some 30 years ago, the homeowners discovered imaginative murals on the walls beneath 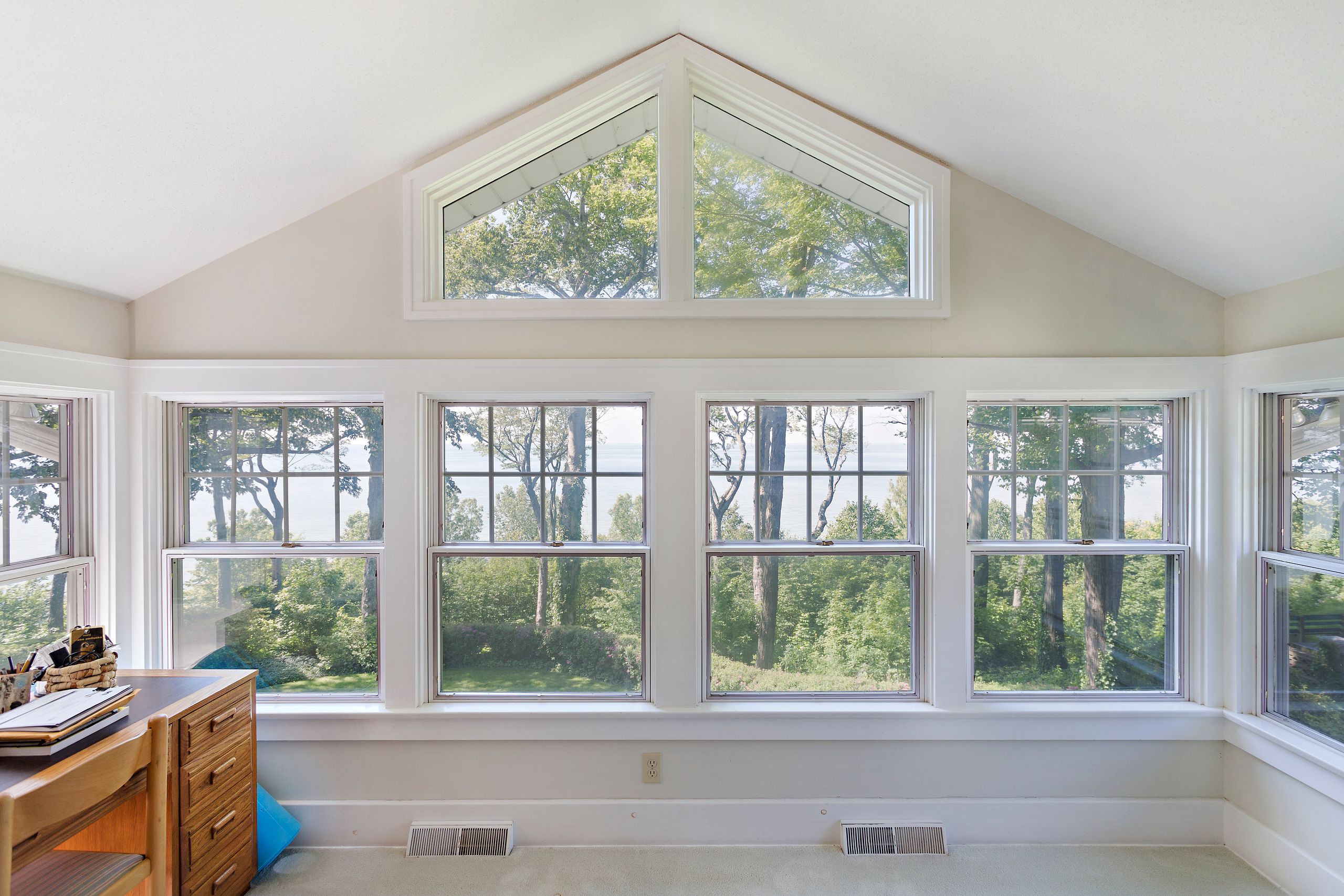 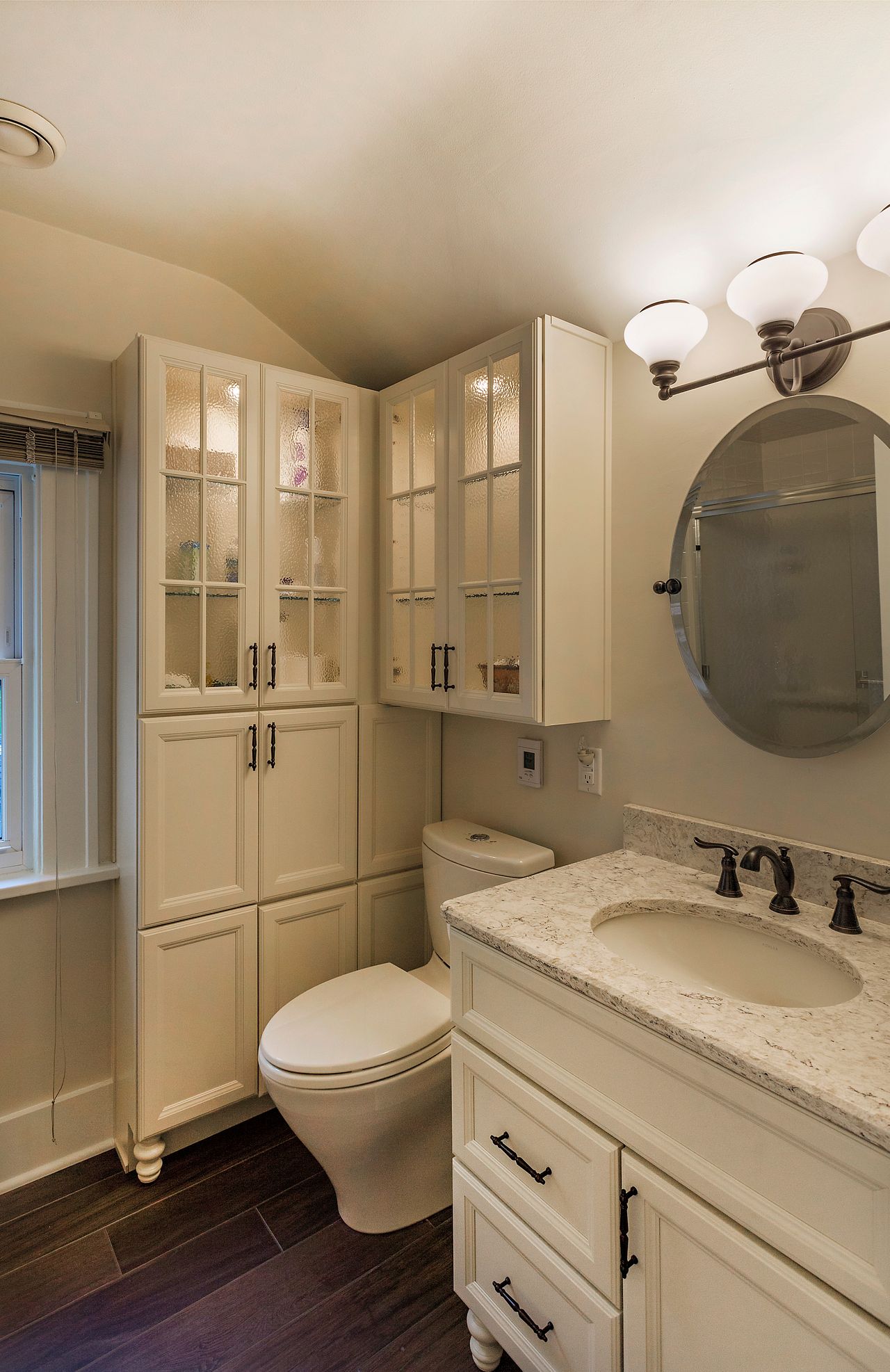 Reno A second-floor bathroom in gentle neutrals and barrel-vaulted ceilings has been recently renovated for new cabinets, fixtures, and heated flooring 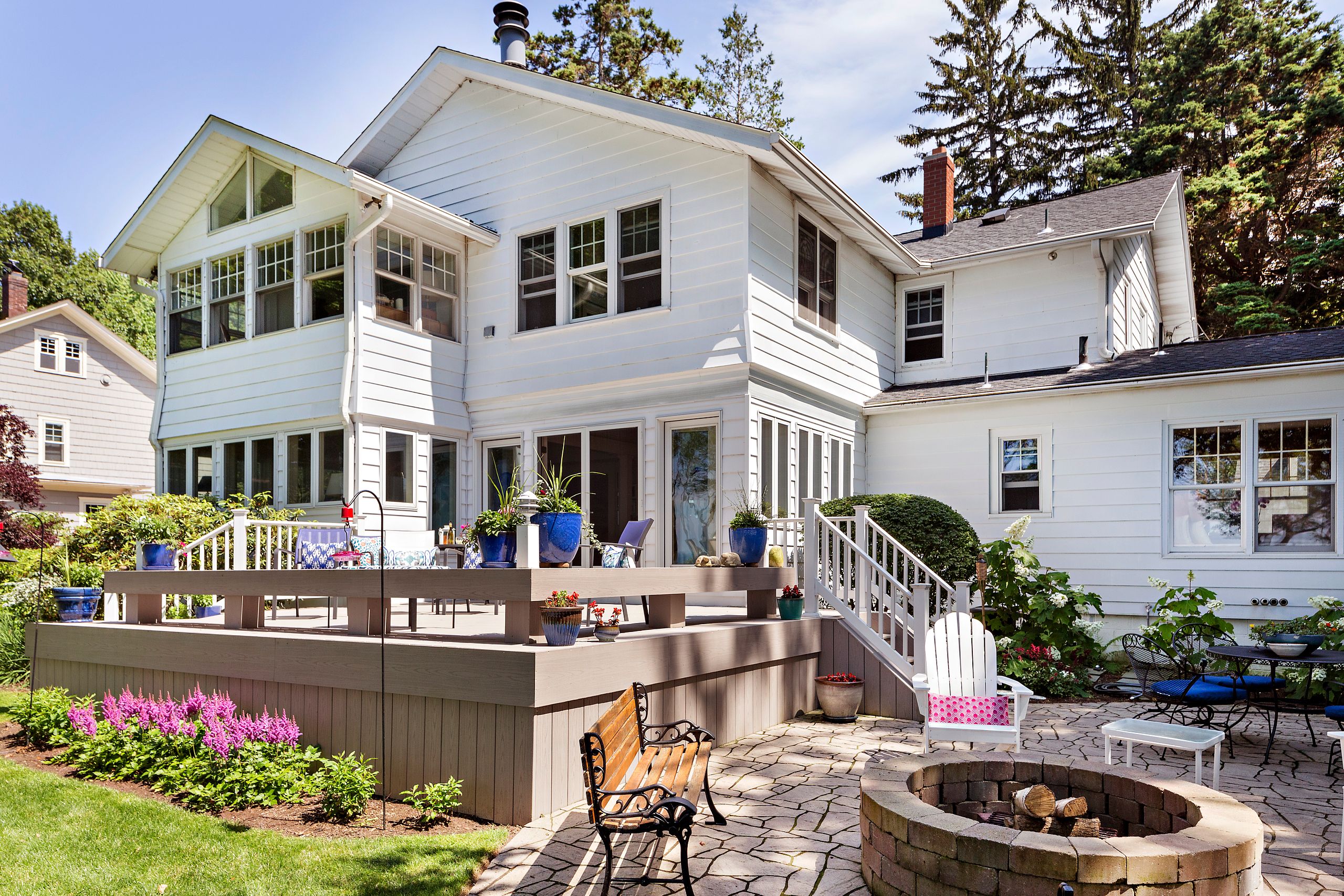 Reno A view of the back of the house, designed specifically for enjoying the lakefront views, features a patio and deck the couple has recently expanded 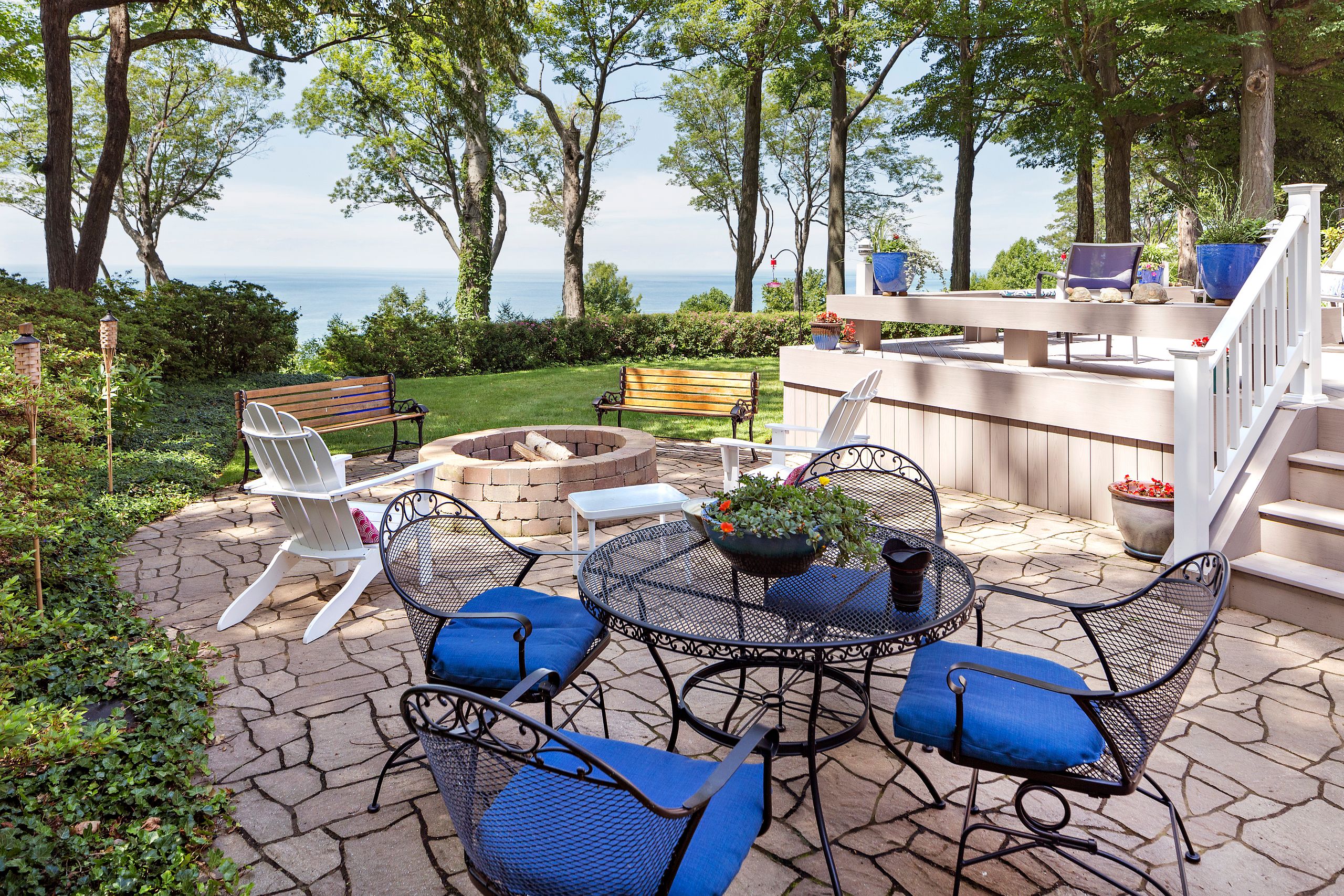 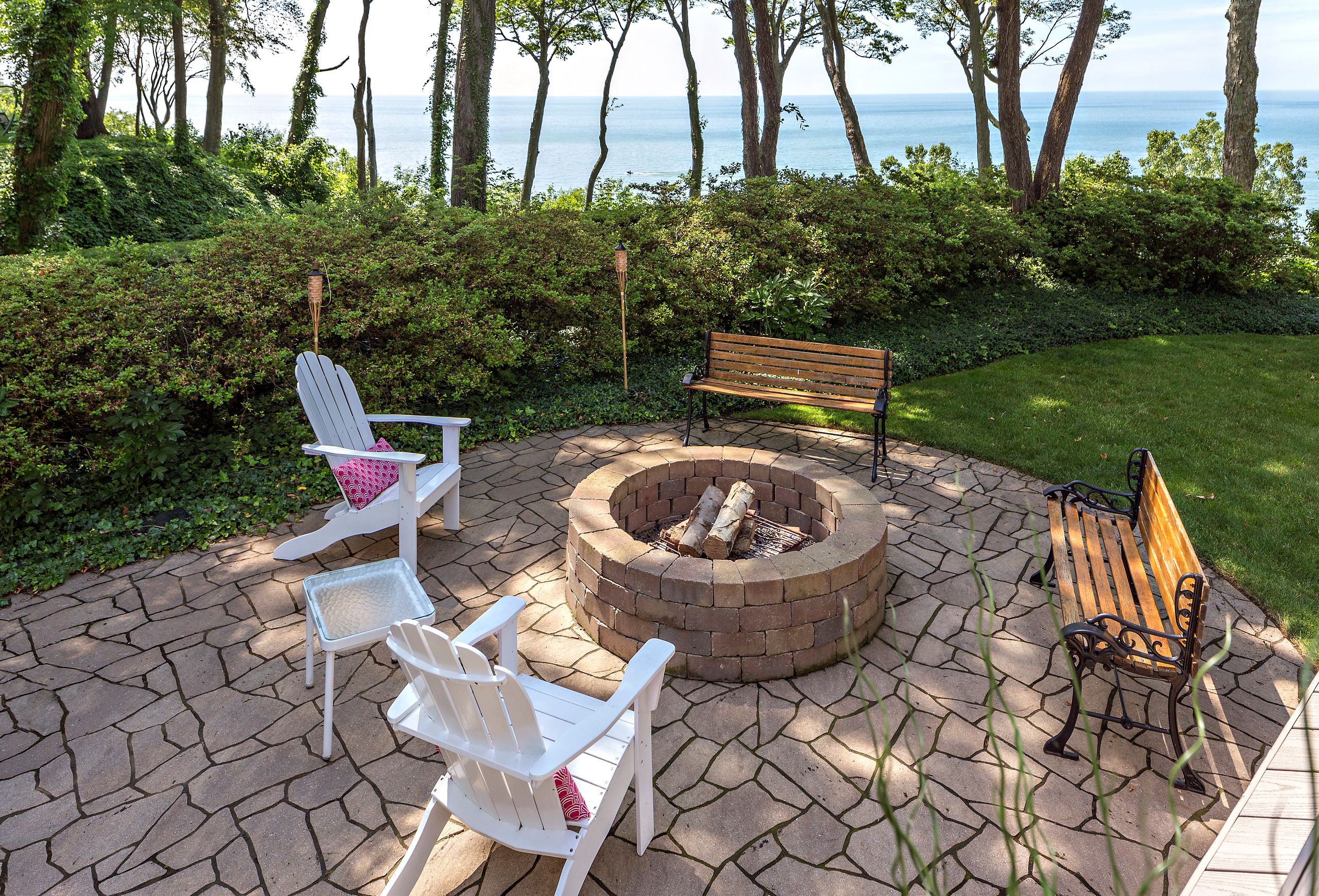 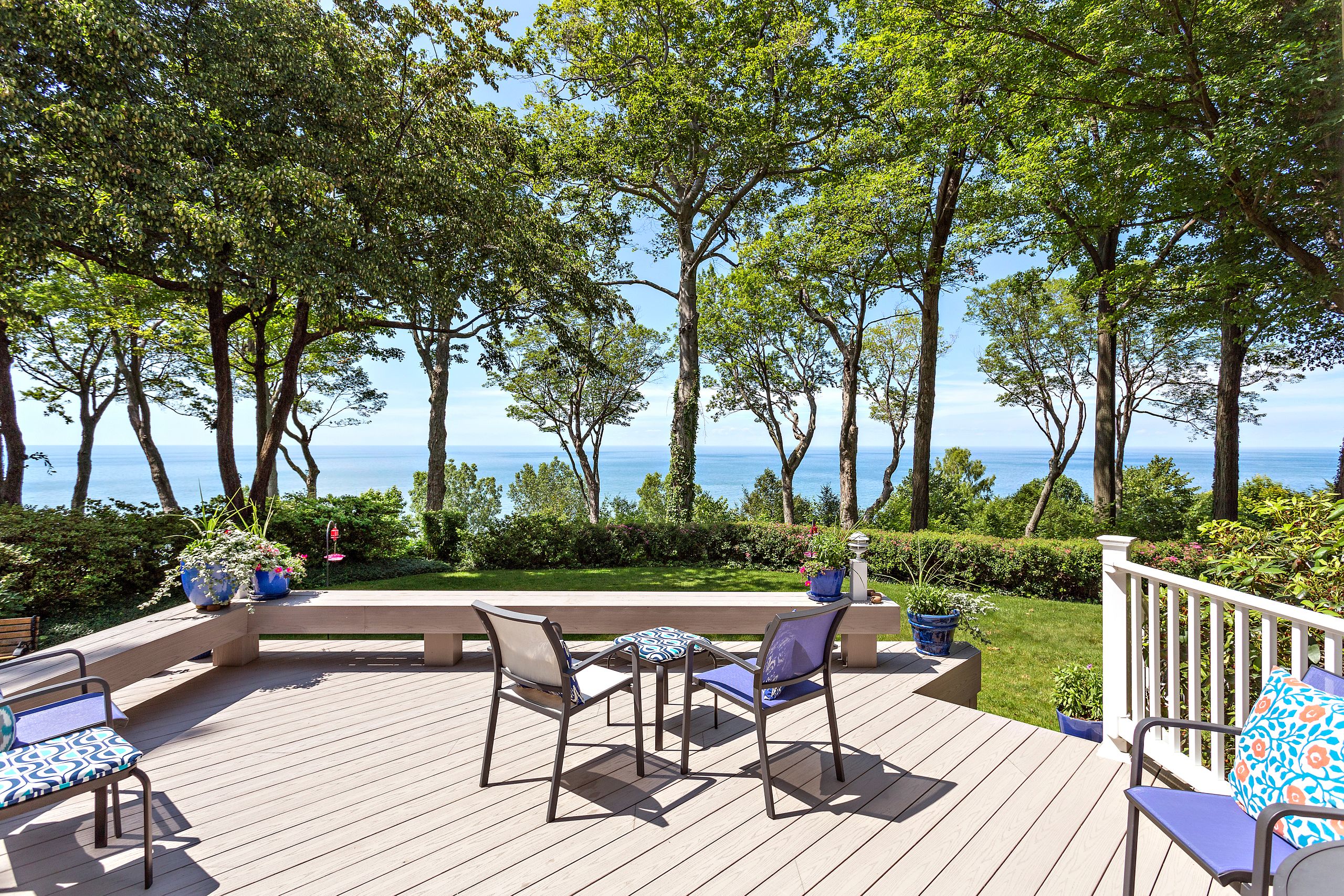 Views The couple spends plenty of time enjoying their back deck, equipped with plenty of seating to enjoy the sunset from any angle 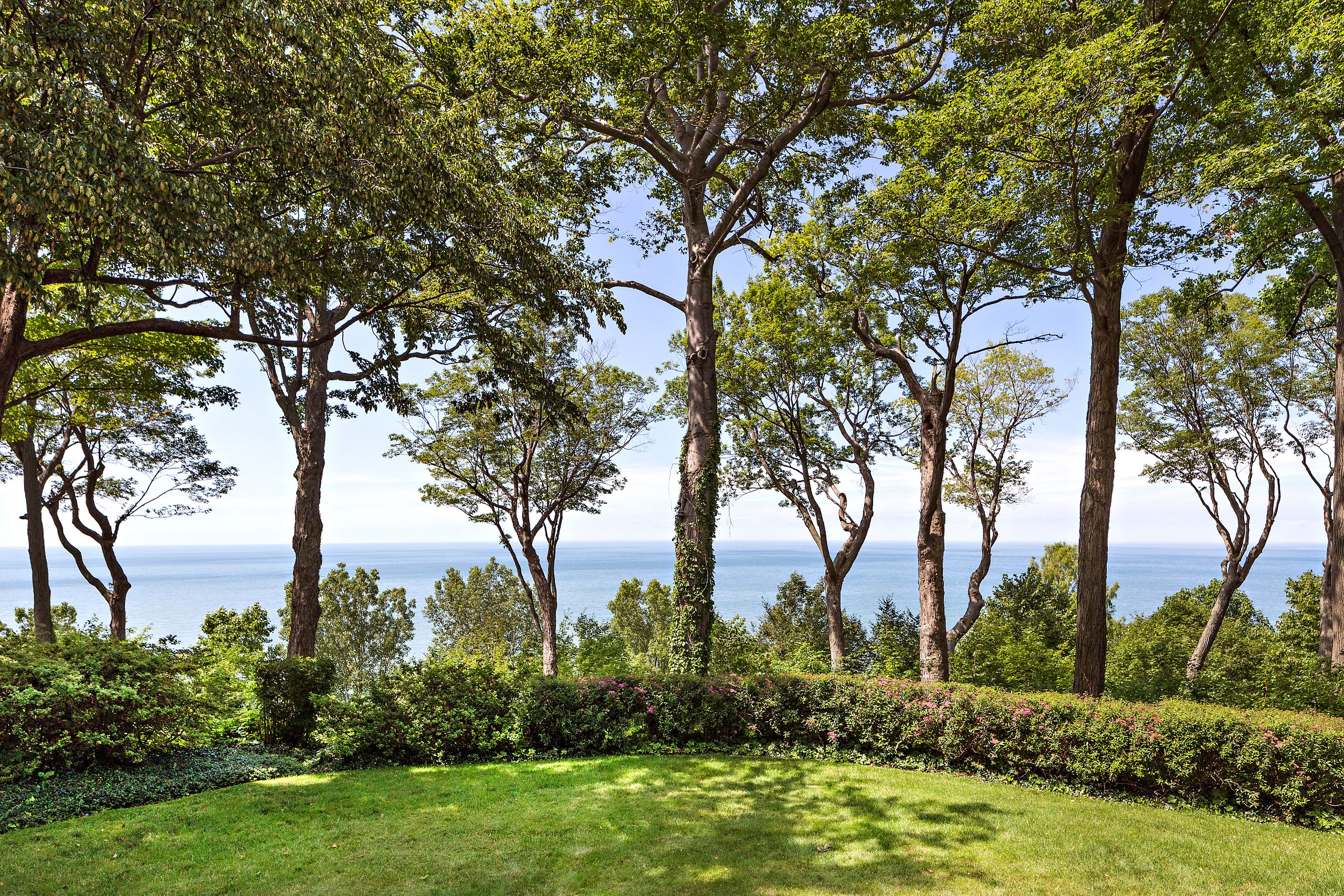 A history of the home

As told by Maureen

Colonial, built in 1938. We have lived here for 34 years. Our home was originally designed as a summer lake home with little storage and closet space, and it only had two small bathrooms. Over the years, we added three more bedrooms (now five total), enlarged the master bedroom, and added a master bathroom. We enclosed three open porches to create more indoor living space. We also had a deck and patio built. All of this was done by a contractor. We’ve slowly tackled these projects over the years as our family grew and our needs changed.

Why did you choose this home?

We chose this home because of the location overlooking the water, and we own the beachfront below the house. For years I would go hunting for beach glass every day after work, and now you’ll see details of my findings all over the house—a huge bowl filled with it on our kitchen table, our dining room chandelier has beach glass hanging from it, etc. I also have custom jewelry made from it.

Tell us about your decorating style.

The architecture is colonial, and the style is traditional with many antique pieces and family heirlooms.

My decorating inspiration is my mother. Her avocation was antiquing, and she was very knowledgeable about it. Our home is now speckled with her treasures, and it’s a gift for my family to walk around our house and remember the stories and people behind our heirlooms. My mother had an amazing eye for finding the diamond in the rough.

Do you have a favorite memory here?

My children growing up in this house, and having all of their friends over is a great memory for me—especially meal time around our large picnic table. We frequently would host half of the swim team or tennis team without much notice. Our meal times were also a free-for-all. We had lots of fun opening our doors to the neighborhood.

What projects will you always outsource?

Always outsource work in bathrooms and kitchens. My family laughs at me because I’ve never upgraded our kitchen, but the appliances have hung in for almost 40 years! A big upgrade that I intend to make soon is changing out our old, tired electric stove with a gas oven and stovetop. Our stove has been through the wringer—its clock stopped working about 15 years ago, but it’s held up through raising five kids!

We’ve recently refreshed our guest bathroom through a few strategic upgrades. We replaced the flooring with heated ceramic tiles— a real treat in our harsh winters! We’ve also replaced the vanity and cabinets and we upgraded the bathroom mirror. Small changes can have a big impact. We plan to upgrade our master bath shortly.

Anything you would change about the house?

I would have loved a finished basement level with a full bathroom and playroom. We currently have a utilitarian cellar / laundry room with low ceilings on a concrete slab. This reno always seems too big to tackle. We would have loved to create a great space for the kids to run around. But while our kids never had a dedicated play space, we encouraged them to be outside and explore the beach and surrounding nature.

What part of the home is your biggest indulgence?

The master bedroom. We have a fireplace in our bedroom that’s constantly lit in the winter to compete with the strong winds off the lake. We are so lucky to experience that view every day!

Our patio and deck to enjoy our lake views. We spend as many summer evenings as we can on our back patio to watch the sun set. Bob knows the view better than the back of his hand, and he can anticipate the exact time of the sunset based on the sun’s position on the horizon. Summer thunderstorms that roll over the lake are also a treat to watch come in! We’ve seen a few water funnels, but luckily we’ve never had major storm damage.

Do you have a favorite piece of furniture in your home?

A marble-top table I inherited from my mother. It’s a gorgeous antique that my father bought for her. The piece itself is striking, but I really love thinking about their partnership and support for one another and the story behind it.

Your favorite room in the home?

Our master bedroom has walls of windows overlooking the lake. We don’t have any window coverings because we’d never want to block the view. We have front-row seats to each sunrise and sunset.

Have you taken on any home projects yourself?

I didn’t DIY anything! However, I am spoiled with a few truly artistic friends—they’ve helped me add touches of personality to each room. I commissioned a handmade stained-glass window insert for Bob about 20 years ago for a set of doors in our living room. Another friend has painted murals of the beachscape in our dining and living room area.

One fun story about a small DIY project we did tackle: About 30 years ago when we decided to remove wallpaper from one of the bedrooms, Bob was up late one night scraping away. He started shouting for me to come up quickly. As he began removing strips of wallpaper, he uncovered four murals that were original to the home. One is of a knight and shining armor, and it remains a feature of one of our guest rooms. The other murals were of the Niña, Pinta, and Santa Maria—Christopher Columbus’ ships. We unfortunately lost them as we expanded the home’s footprint and made another bedroom. We’re still sad about that!

Do you have any advice for other homeowners?

Live in a house before you make any major decisions, and get professional advice before doing anything expensive. Be practical! Your home doesn’t need to be perfect—enjoy the imperfections and character of your space! 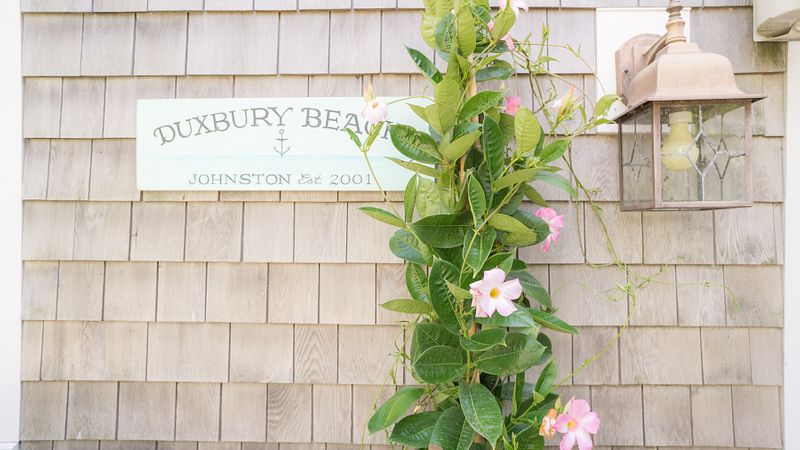 A Cape Cod Home Made for an Adventure-Seeking Family

Tour a New England home perfect for those who love backyard soccer games, outdoor showers, cross-country skiing, and strumming a ukulele on the porch. 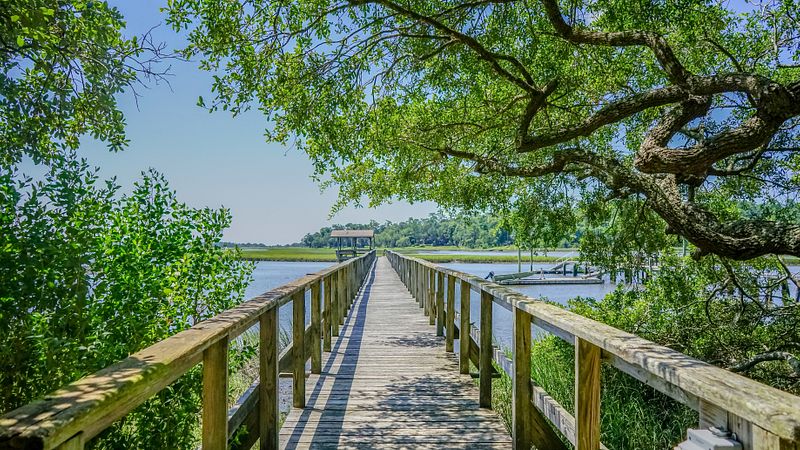 A Waterfront Cottage on the Banks of Hewletts Creek

Step inside a one-bedroom waterfront cottage tucked into the Hewlett’s Creek watershed. 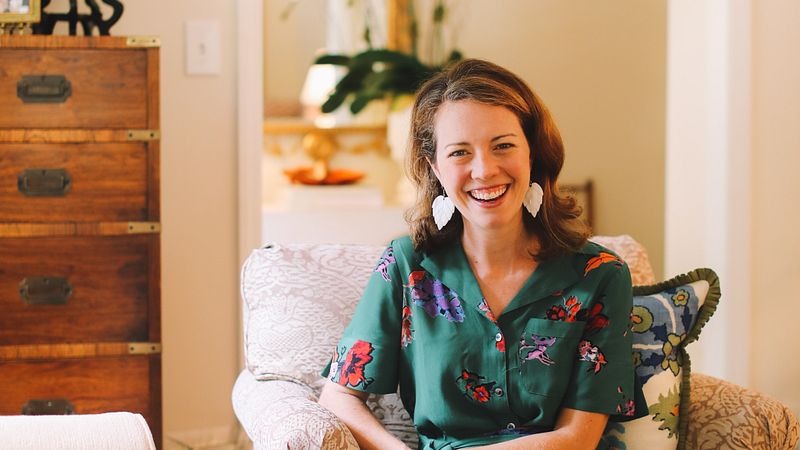 On the Art of Reinvention: An Interior Designer’s Classic and Eclectic Family Home