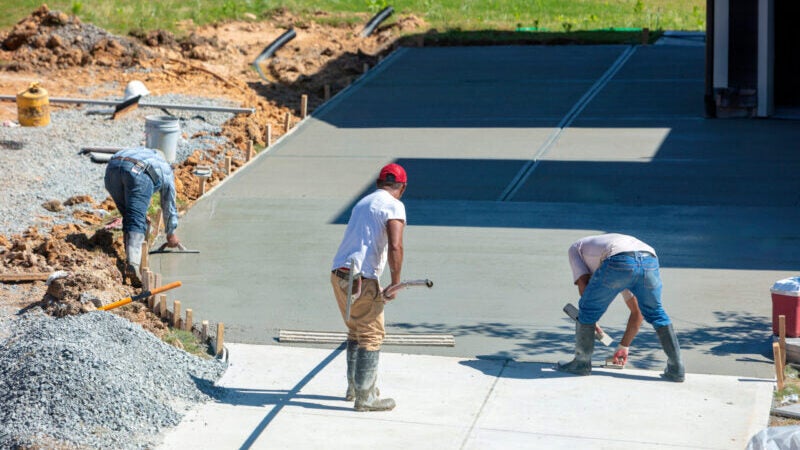 It’s easy to overlook the foundation when you’re buying a new home, the kind of foundation and its condition can have a big impact on how your new home ages and what repair costs you might have down the road. Concrete slab foundations are very common but not necessarily the best kind of foundation for all homes.

This guide explores the pros and cons of concrete slab foundations, paying particular attention to common problems they develop and how they compare with other kinds of foundations.

What is a Slab Foundation?

Slab foundations are the most common type of foundation because they’re cheap and simple to build. A slab foundation is just a 6 to 8-inch concrete pad — or slab, if you will — that your house sits on top of. The concrete is poured on top of soil that’s been prepared with sand or gravel to assist with drainage.

How are Slab Foundations Built?

There are three common types of slab foundations that all feature a slab of concrete at their core: slab-on-grade, T-shaped, and frost-protected.

A slab-on-grade foundation is probably what you think of when you hear the phrase “slab foundation.” It consists of a single monolithic chunk of concrete that’s poured directly on top of prepared soil. It doesn’t feature any bells and whistles and is as simple as a foundation gets.

If you live somewhere where the ground freezes in the winter, a common practice is to build a t-shaped support structure out of concrete below the frost line. Construction involves setting inverted t-shaped feet in the ground and building walls on top. The slab is then poured inside the frame. T-shaped slabs are more expensive than slab-on-grade foundations and take longer to finish, but they also offer more structural integrity and better support for load-bearing walls.

Frost protected foundations are designed to protect homes in colder climates from frost heaves. The primary advantage they have over t-shaped foundations is a shallower depth, which makes construction easier and requires fewer materials. Frost-protected foundations use polystyrene sheets to insulate the edges of the slab and the ground around the foundation walls, effectively raising the frost level and eliminating the risk of frost heave.

Pros and Cons of a Slab Foundation House

Slab foundations have several advantages that make them an attractive option for homeowners, but they also have a few drawbacks.

Pros of a Slab Foundation House

Slab foundations offer several major benefits over homes with other types of foundations.

Slab foundations are extremely cost-effective per square foot, offering a sturdy base for your home at much lower prices than basements or crawl spaces. The typical cost for a slab foundation is significantly lower than the alternatives.

Slab foundations are also easier to build than other kinds of foundations since many can be completed with a single pour, which means less waiting time and faster home construction.

Since there aren’t any open spaces under your home with a slab foundation, the risk of infestation from termites and other pests is much lower. Of course, insects and critters might find another way into your home, but at least you don’t have to worry about finding any nests in your basement.

As long as you keep an eye out for cracks, there’s not much you have to do to maintain a slab foundation.

Cons of a Slab Foundation House

Despite the relatively attractive advantages slab foundations have, they also come with some pretty sizable drawbacks.

One of the biggest downsides to slab foundations is that there isn’t any space to run gas and water lines, which means they have to be embedded in the foundation. When your pipes wear out, you’ll have to open your foundation to replace them, increasing the cost and lengthening the project.

Even if you have a frost-protected or t-shaped foundation, slab foundations are prone to cracking in the winter. Even minuscule amounts of moisture can cause serious cracks in a slab foundation, which makes them a slightly risky option in colder climates.

Slab foundations are low-maintenance compared to basements and crawl spaces, but it’s much more of a hassle to work on when things go wrong.

Homes with slab foundations have some unique problems that don’t affect homes with other types of foundations.

The number one problem affecting slab foundations is cracking. Cracks can be caused by freezing temperatures, shifting soil, tree roots, and natural disasters like earthquakes.

If the soil under your foundation shifts and settles, it can cause your foundation — and, therefore, the rest of your home — to shift and become unstable. This can lead to a host of serious problems, like sagging ceilings, bowed walls, and cracks in both the foundation and exterior walls of your home.

Freezing moisture in the ground under a slab foundation can cause it to rise, creating similar problems to settling. To combat this, slab foundations are built on a layer of sand or gravel to encourage water to drain out from underneath your home.

Here’s how slab foundations compare to other common kinds of foundations.

Compared to a slab foundation, crawl spaces take a bit more time and effort to construct, but offer a few advantages. Homes with crawl spaces are less prone to flooding since the living space sits above the ground, although proper drainage is still important. Crawl spaces are also perfect for housing utility lines and air conditioning ductwork and easy access to perform maintenance or replace pipes when something goes wrong.

Building a home with a crawl space takes a bit longer and is slightly more expensive than building one with a slab foundation. A crawl space also needs to be regularly inspected to make sure it isn’t developing mold or mildew and that no animals have decided to take up residence.

Unfortunately, basements are trickier to construct, take longer to build, and are more expensive. They’re also susceptible to flooding, so you need to make sure your basement is properly sealed and that your landscaping encourages water to flow away from your home. Vapor barriers can also help, although a basement isn’t a great choice in an area with a high water table or a region with a damp climate.

Slab foundations are a good affordable option, although they need to be constructed properly to avoid catastrophic problems down the road. Colder climates pose a challenge to slab foundations, but t-shaped slab foundations and frost-protected slabs offer some protection against cracks caused by freezing moisture and frost heave.

Basements and crawl spaces are more involved to build and cost more than slab foundations, but they also provide entryways for pests and can struggle with moisture-related problems. Overall, a slab foundation is a good choice for the right home in a warmer climate.

How thick is a house slab foundation?

Most slab foundations are between 6 and 8 inches thick, with virtually all slabs falling between 4 and 12 inches.

Cracks in house foundations are common, but they can be a sign of trouble. If you notice cracks in your slab foundation, you should contact an engineer to perform an inspection. Repairing small cracks is easy, so don’t let them get too big before you call a licensed contractor or home improvement specialist.

How are slab foundations repaired?

How slab foundations are repaired depends on what kind of damage the foundation has and how severe it is. Small cracks can be repaired with epoxy resin, but cracks caused by larger underlying issues require more extensive foundation repairs like installing piers or slabjacking.

Do slab foundations have footings?

T-shaped slab foundations have footings, but plain slabs do not.

Do slab foundations have crawl spaces?

No. A crawl space is a different kind of home foundation that’s raised above the ground. Slab foundations sit directly on the ground beneath your home.

No, not usually. Rebar and wire mesh reinforcements are not a standard part of slab foundations but are sometimes used in foundation repair. 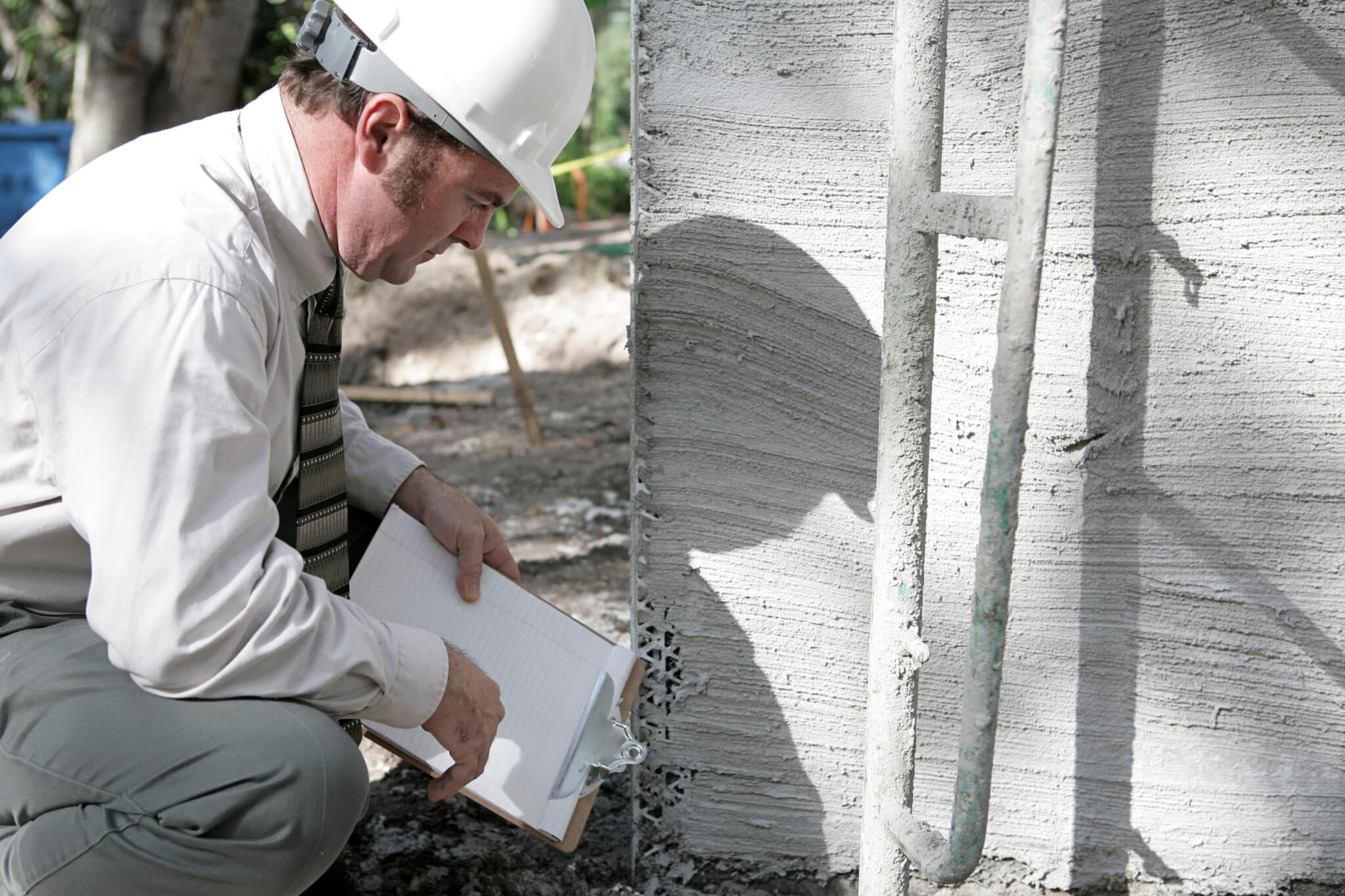 Are you worried about your house’s foundation? Click here to learn when you should have your foundation inspected and how much an inspection costs. 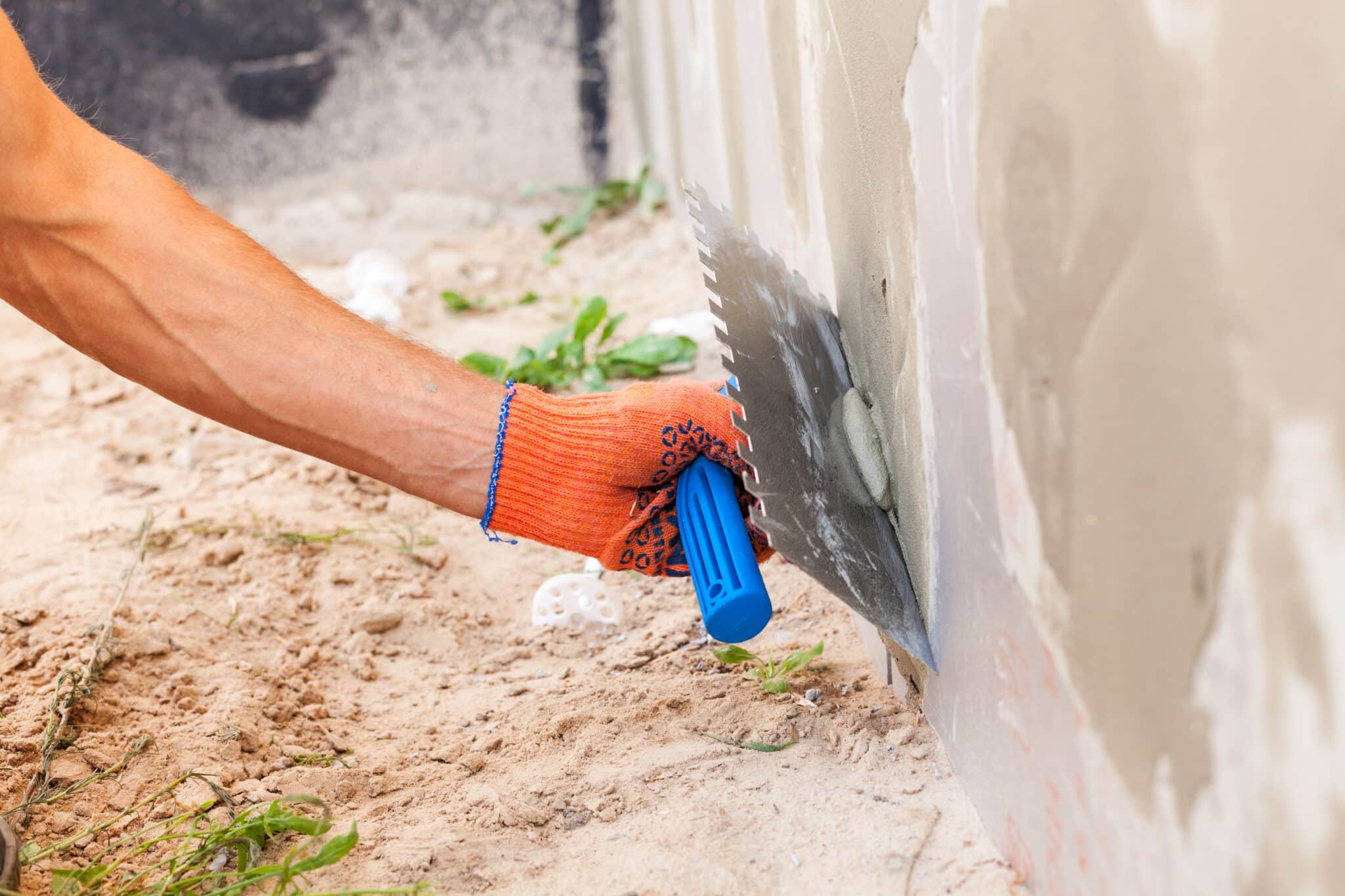 Foundation Repair: How to Fix Cracks and Cost Guide (2022)

Have a crack in your foundation? Read this comprehensive guide covering everything you need to know about different types of foundation repairs and their costs. 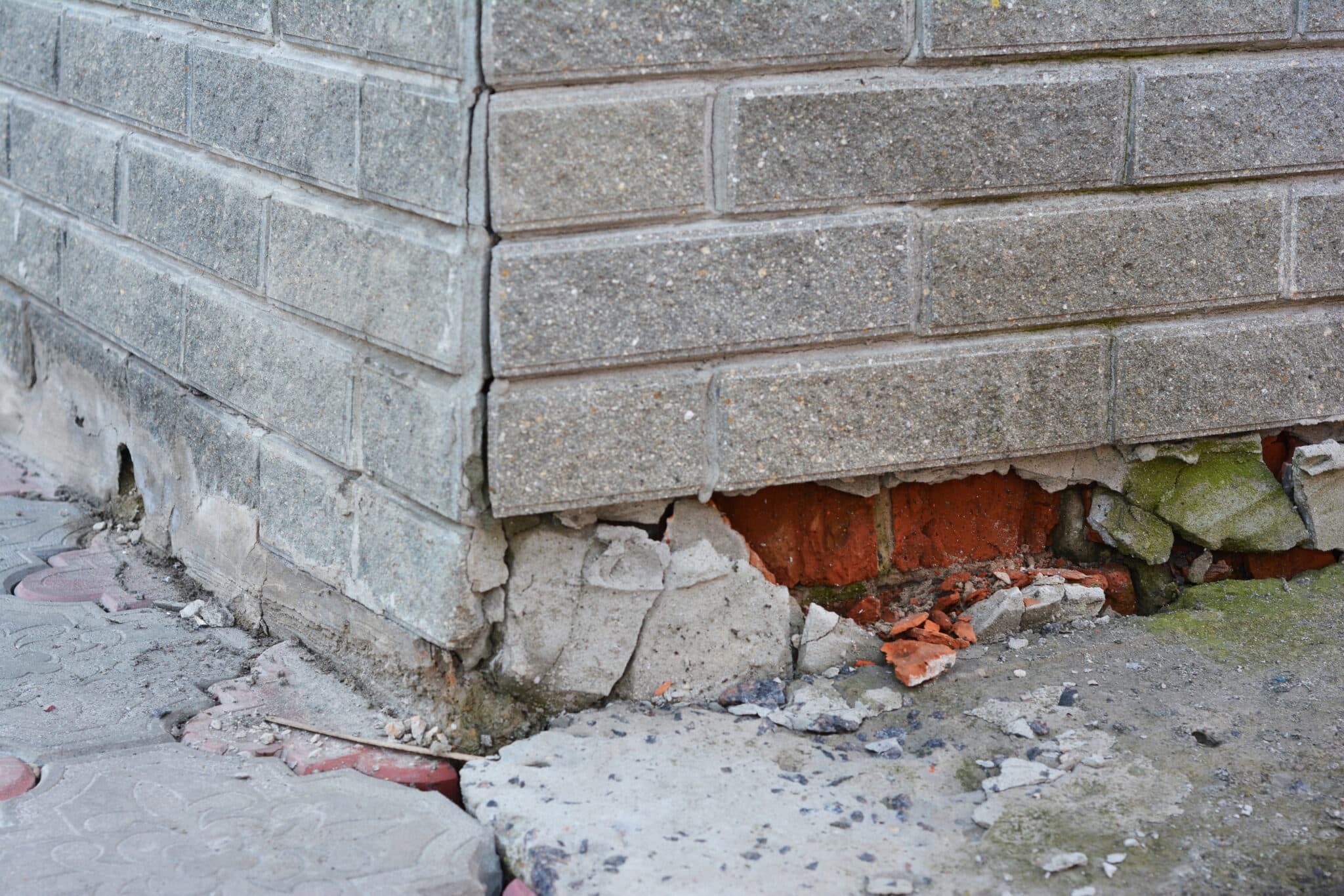 Is it Safe to Live in a House with Foundation Problems? Depends.

Is it safe to live in a house with foundation problems? In this article, we share some preventative tips and things to look out for. 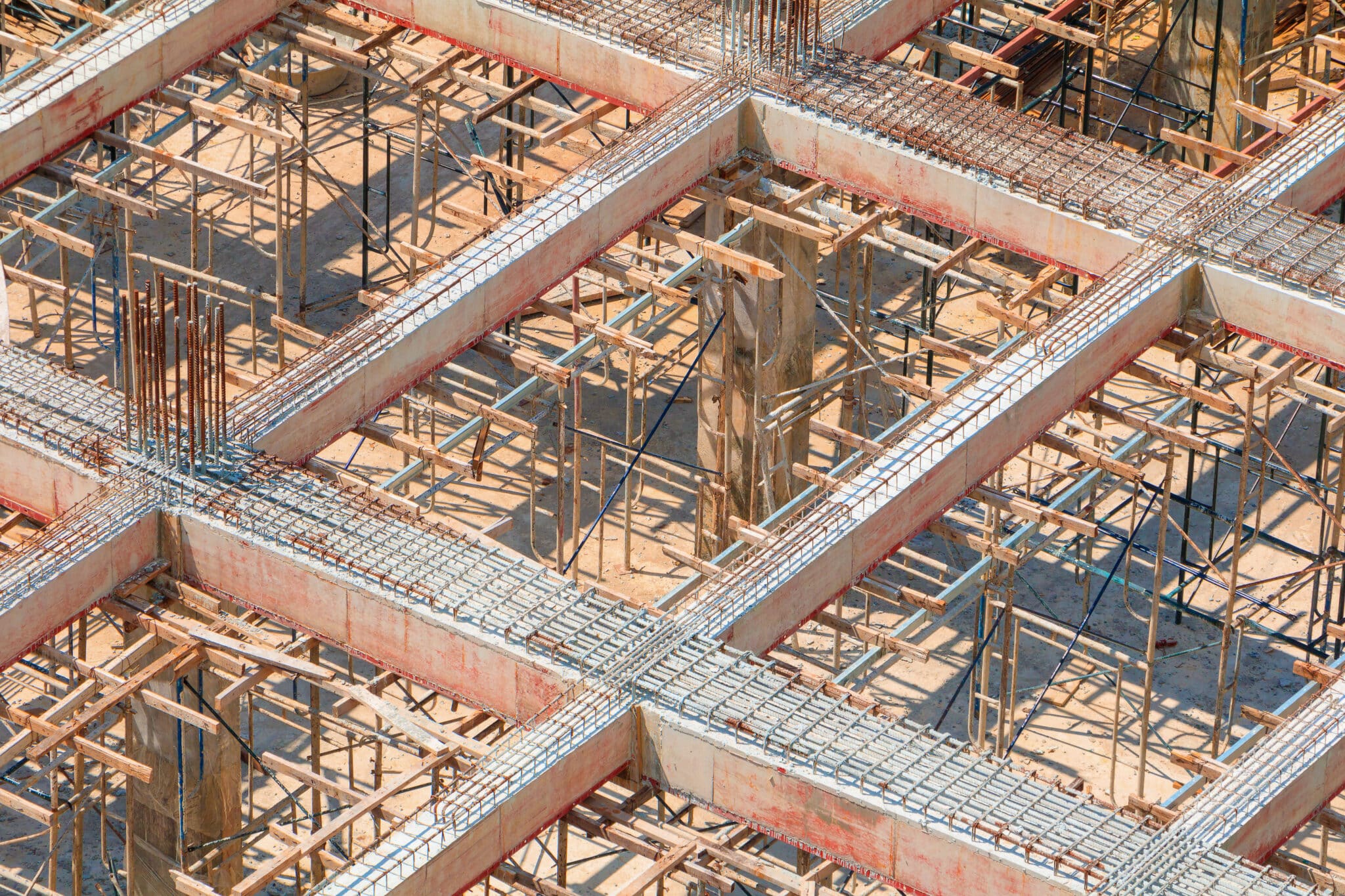 Pier and Beam Foundation: Pros and Cons, Cost, and Comparisons (2022)

Are you interested in building a house with a pier and beam foundation? Click here to learn about the pros, cons, and cost of this type of foundation.