Study: People Are Definitely Judging Your Home.
We Asked Them How. 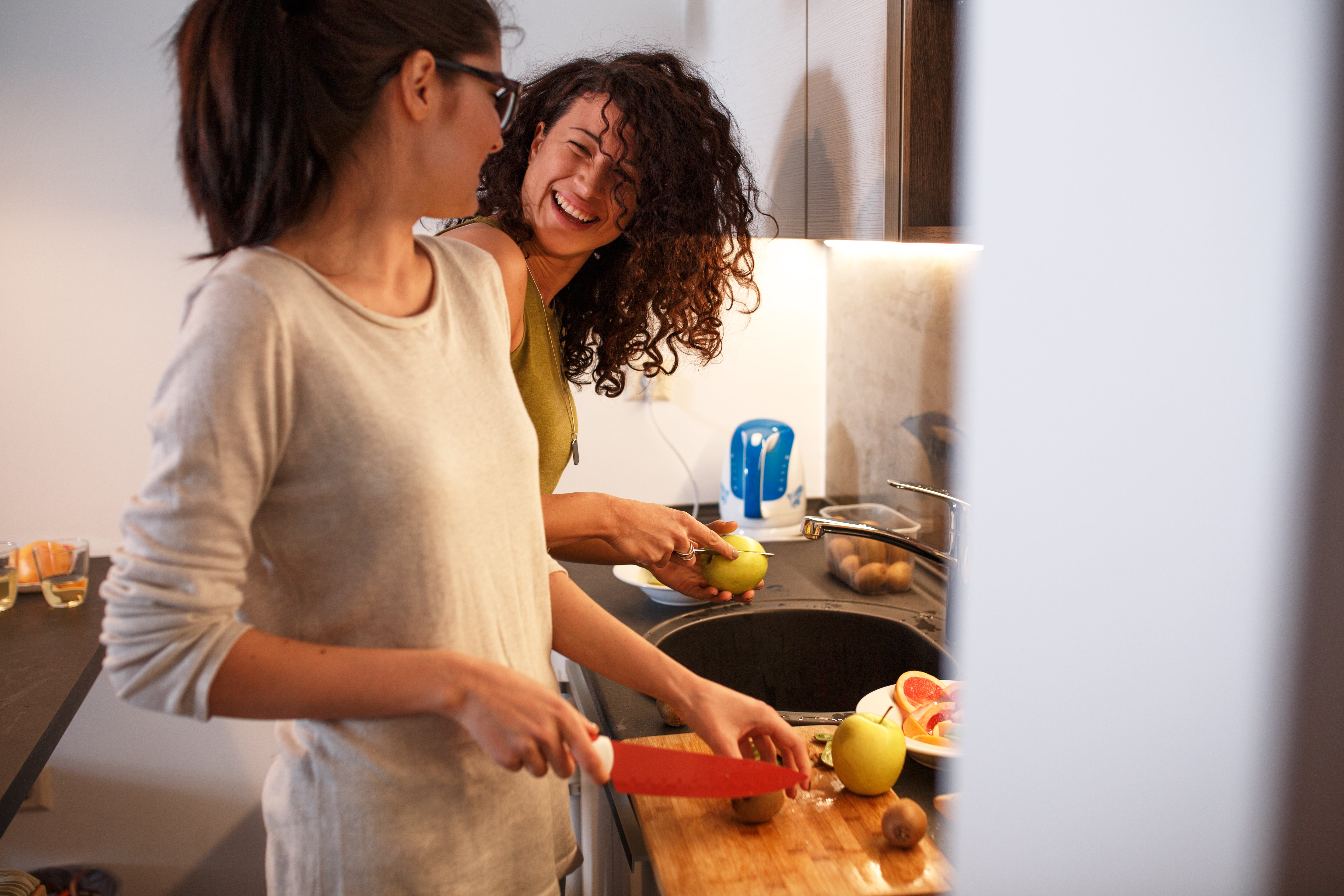 We may not like to admit it, but we do judge others based on their homes—whether that’s cleanliness, how stylish it is, or its perceived cost—and we know they judge us too. Most of us spend time preparing, decorating, and cleaning to make our guests feel welcome and comfortable, and—let’s be honest—impressed. We’re certainly not ones to operate based on others’ opinions, but we are suckers for curiosity—and for eliciting a great response. So we just had to know.

To better understand what people notice about our homes and what leads people to judge, we surveyed more than 1,800 people about exactly what they think about your home—yes, yours—when they walk through the door.

First things first. What do your guests notice about your home when they walk in the door? Break out the mop, this one isn’t hard to satisfy: 41% of respondents to our survey say the first thing they notice about someone’s home is how clean it is. Twenty-eight percent say the first thing they notice is how it smells (that is, for better or for worse). And don’t throw out your KonMari books just yet, organization, or lack thereof, is the third most popular answer.

Pet owners can take it easy, though: less than 1% of respondents said that the presence of pet hair is the first thing they notice. So shed away, practically no one will notice.

57% of people say that having unkept landscaping would make them think less of someone.” 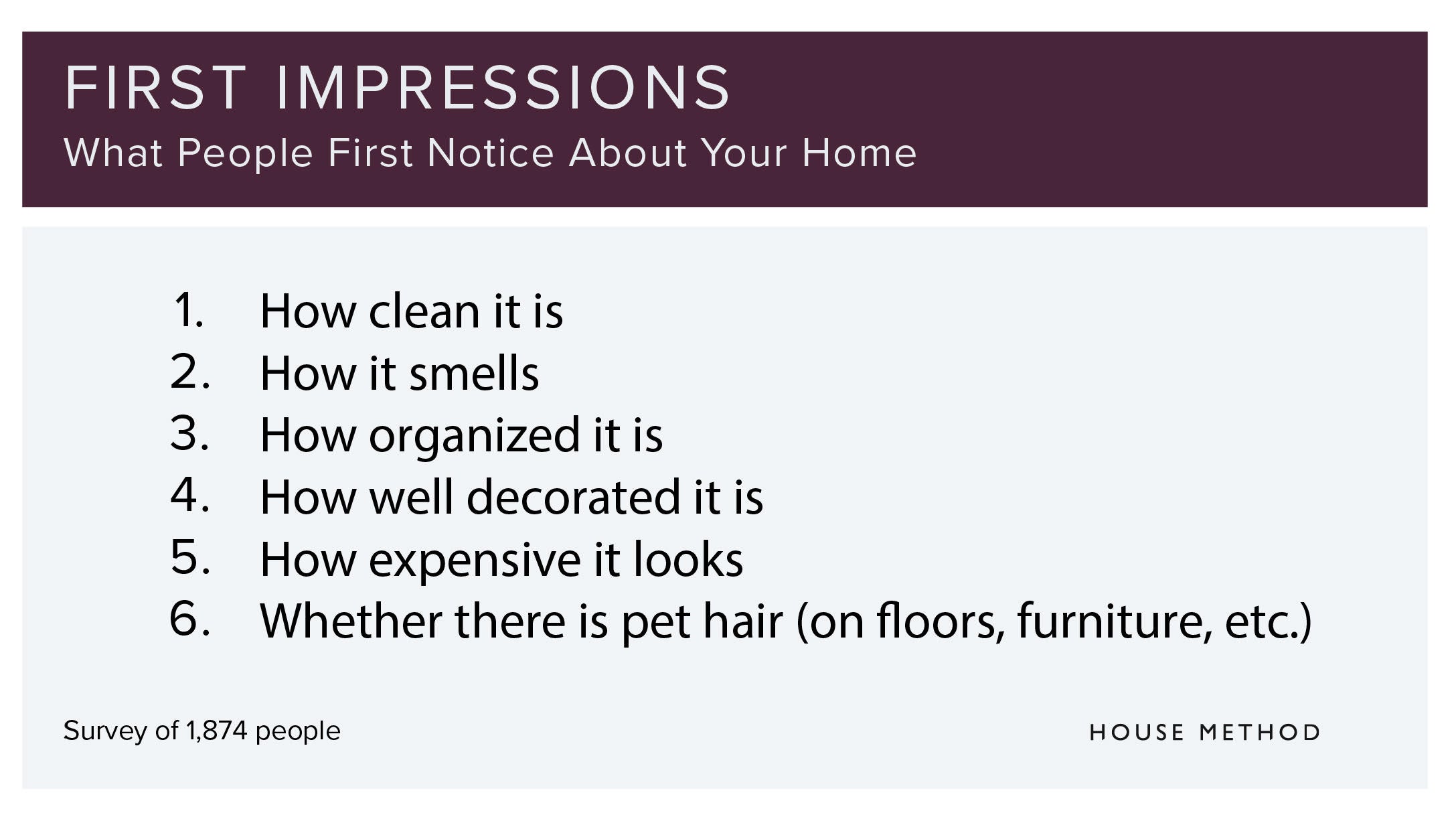 Here’s what our survey shows about what people are judging about your home when it comes to looks and cost—because they’re 100% doing it.

Curb appeal is a huge factor in making a great first impression, and a big part of that first impression is your landscaping. Our study shows that that’s where most people will judge you as well: a majority—57%—of people say that having unkept landscaping would make them think less of someone. In fact, according to our survey, shoddy landscaping is the number-one reason someone would judge you based on your home. 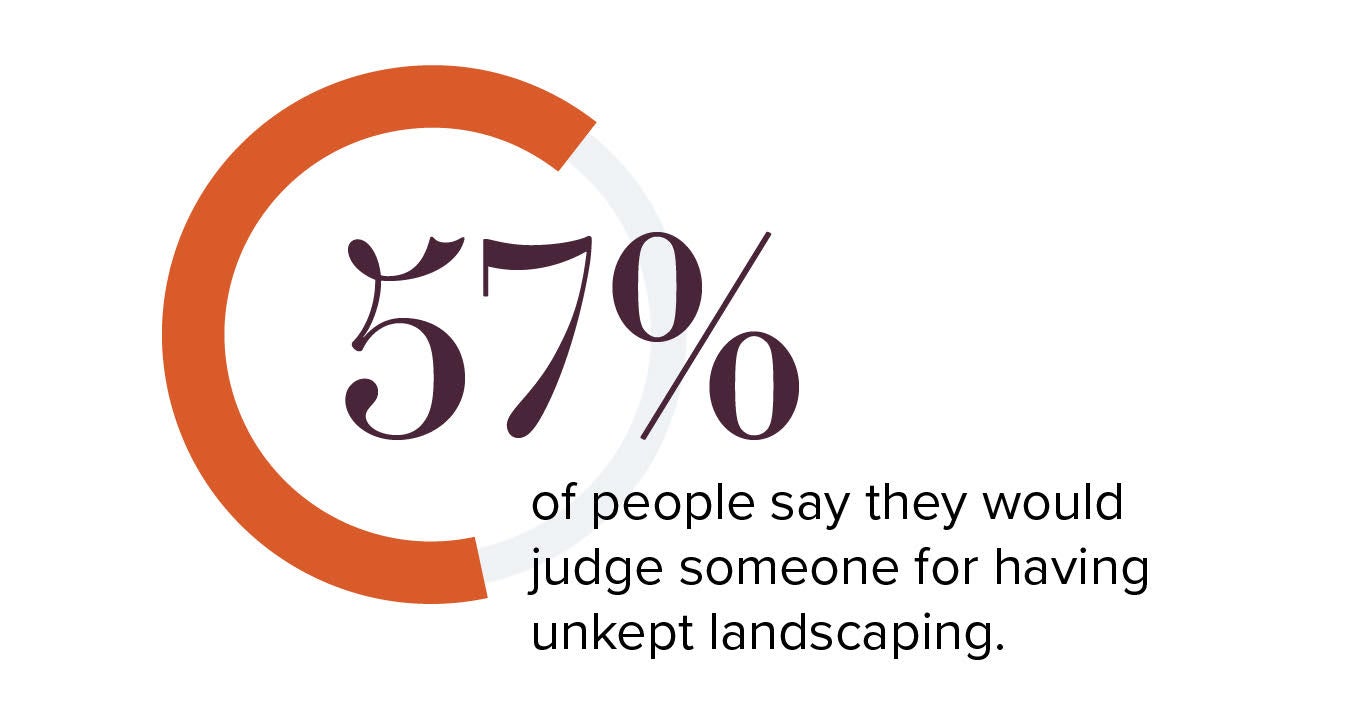 The older you are, the more likely you are to judge someone for the look and perceived cost of their home.

But the younger you are, the more likely you are to judge someone based on how updated their house is. 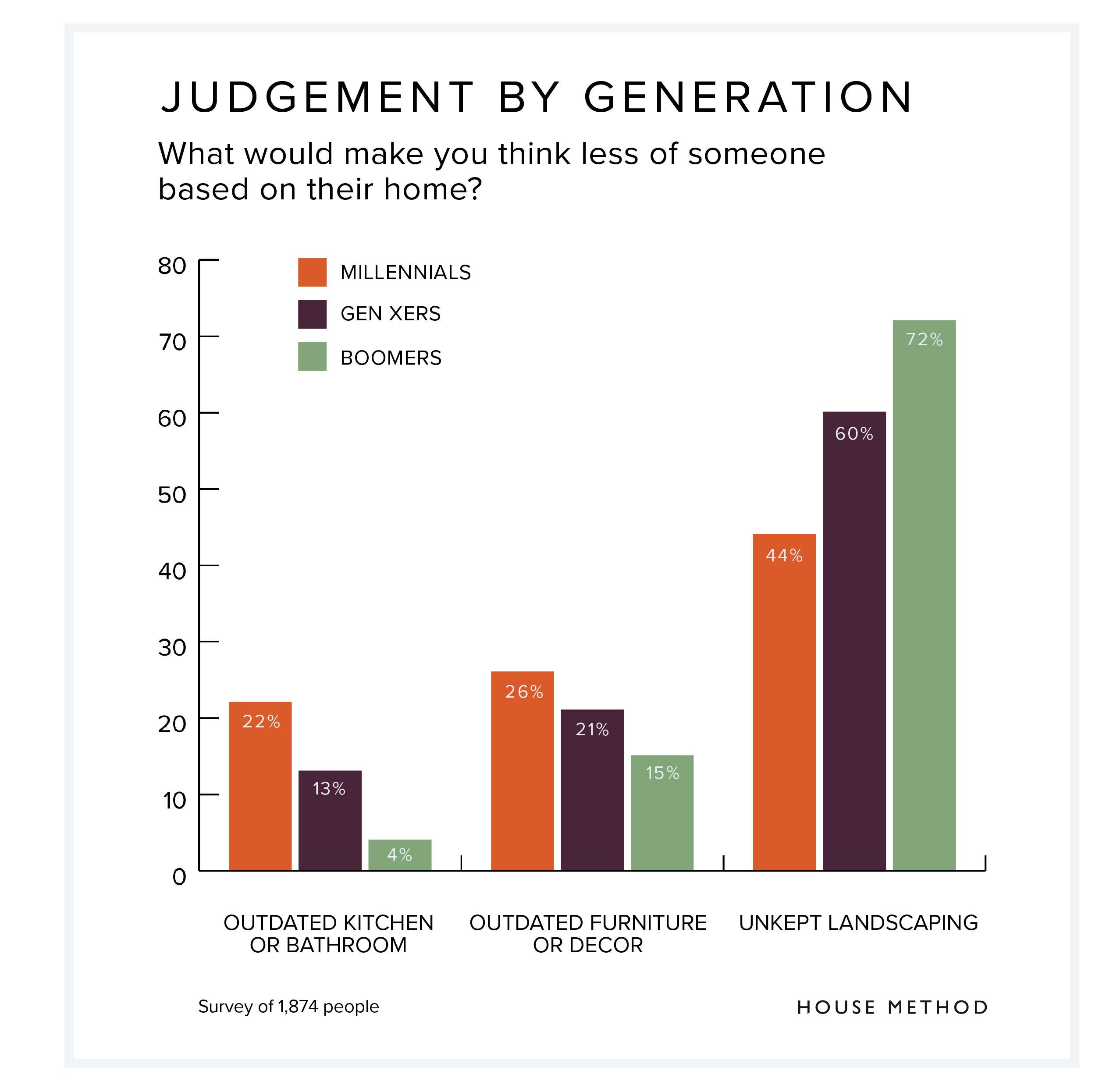 Here comes the juiciest bit. So, how much are we snooping around about our friends’ homes? Well, more than a quarter of people—31%, in fact—say they have looked up the cost of a friend’s home or their rent. And across generations, we’re all just as likely to go snooping around about our friends’ homes, and the same goes with colleagues. Seventeen percent of all respondents say they’ve looked up the cost of a colleague’s home or rent—and that percentage is roughly the same across generations. 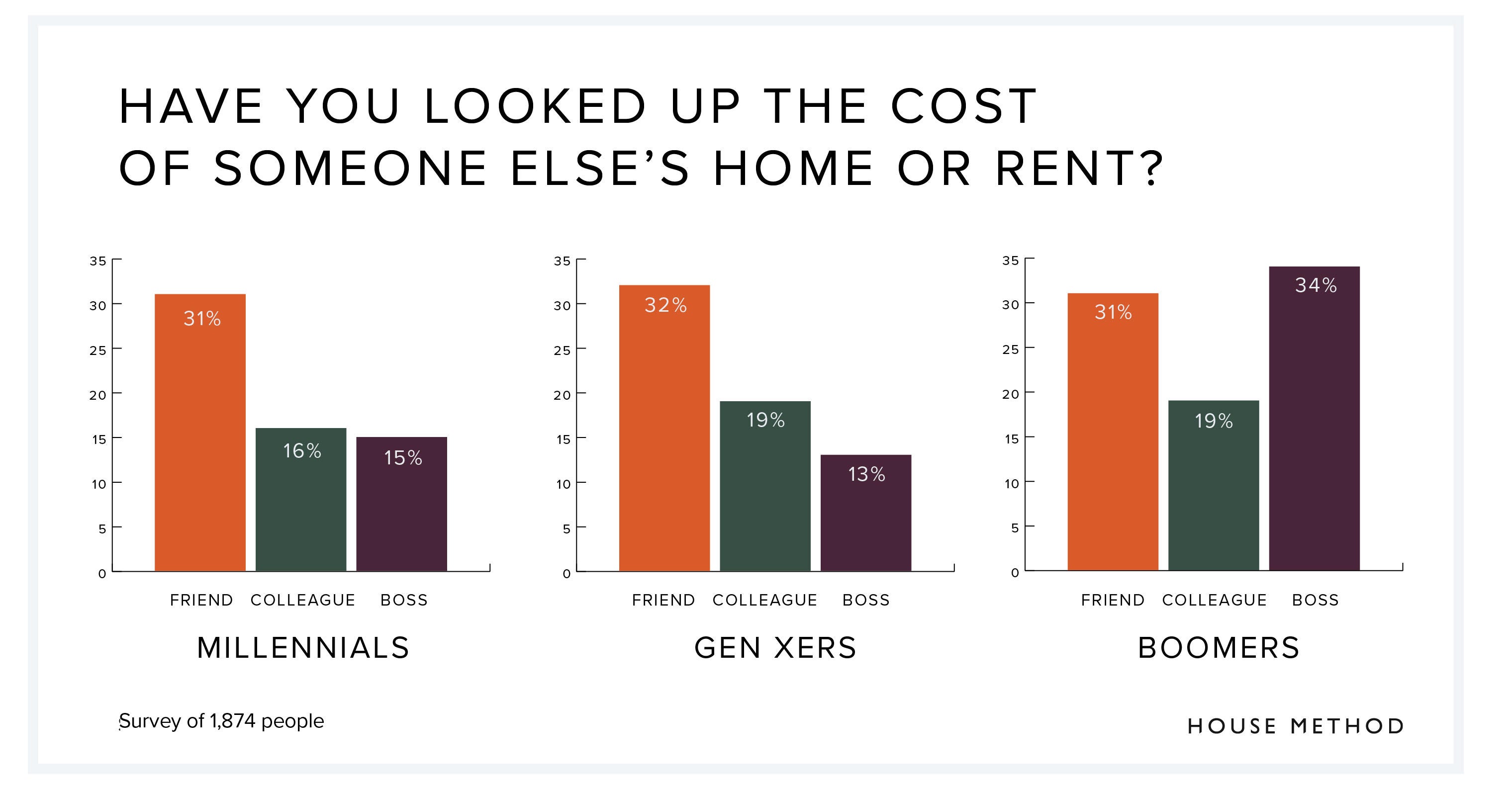 We collected survey responses from 1,874 singles Amazon’s Mechanical Turk. The data we are presenting relies on self report. There are many issues with self reported data. These issues include, but are not limited to: selective memory, telescoping, attribution, and exaggeration.

If you’d like to share our graphics and information with your own audience for noncommercial purposes, go for it. We ask only that you be a good internet neighbor and provide a link back to this page so the House Method team gets credit for their work.

We Won't Judge You for Reading More 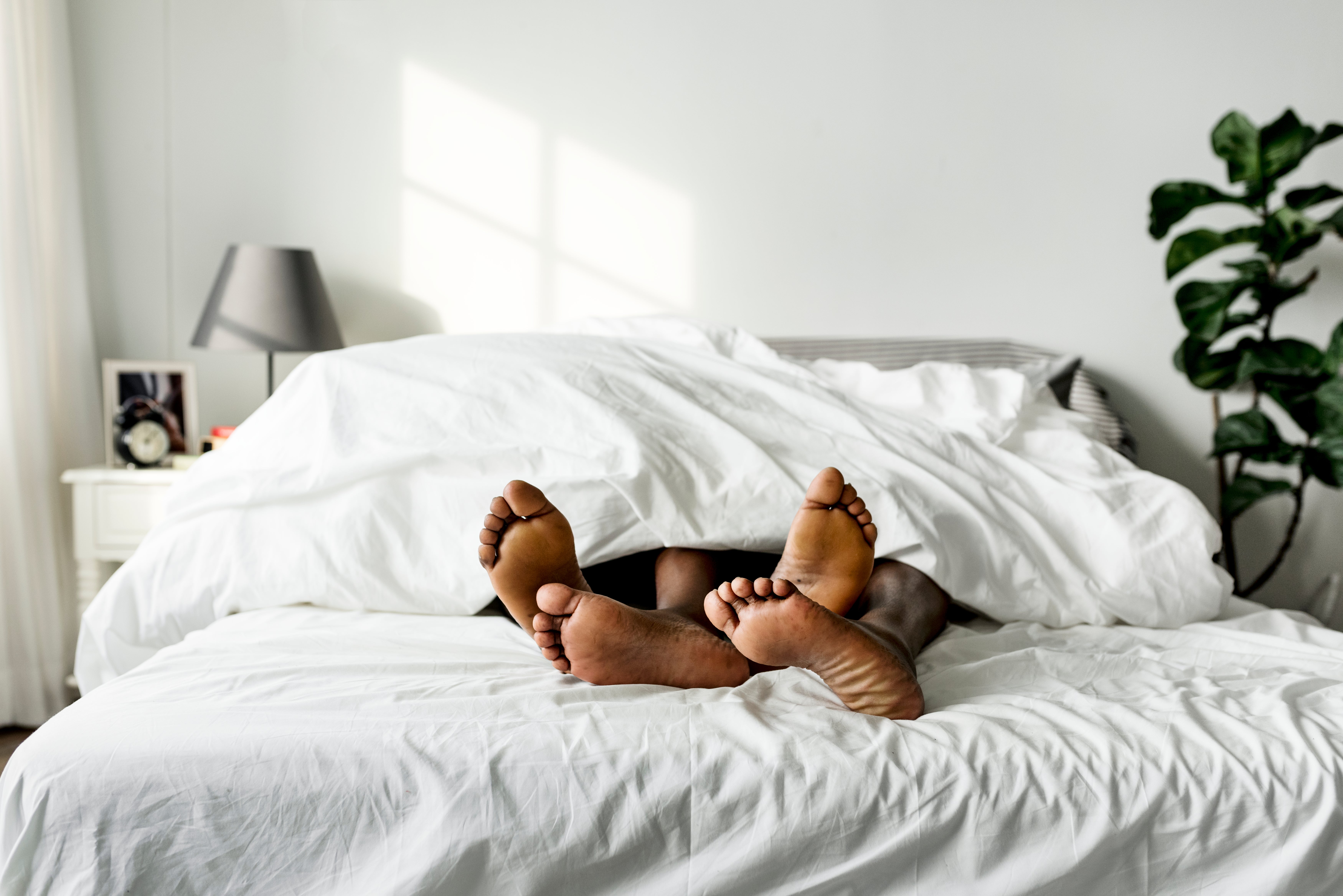 Sex Around the Home: The Most Popular Locations for Sex Outside the Bedroom 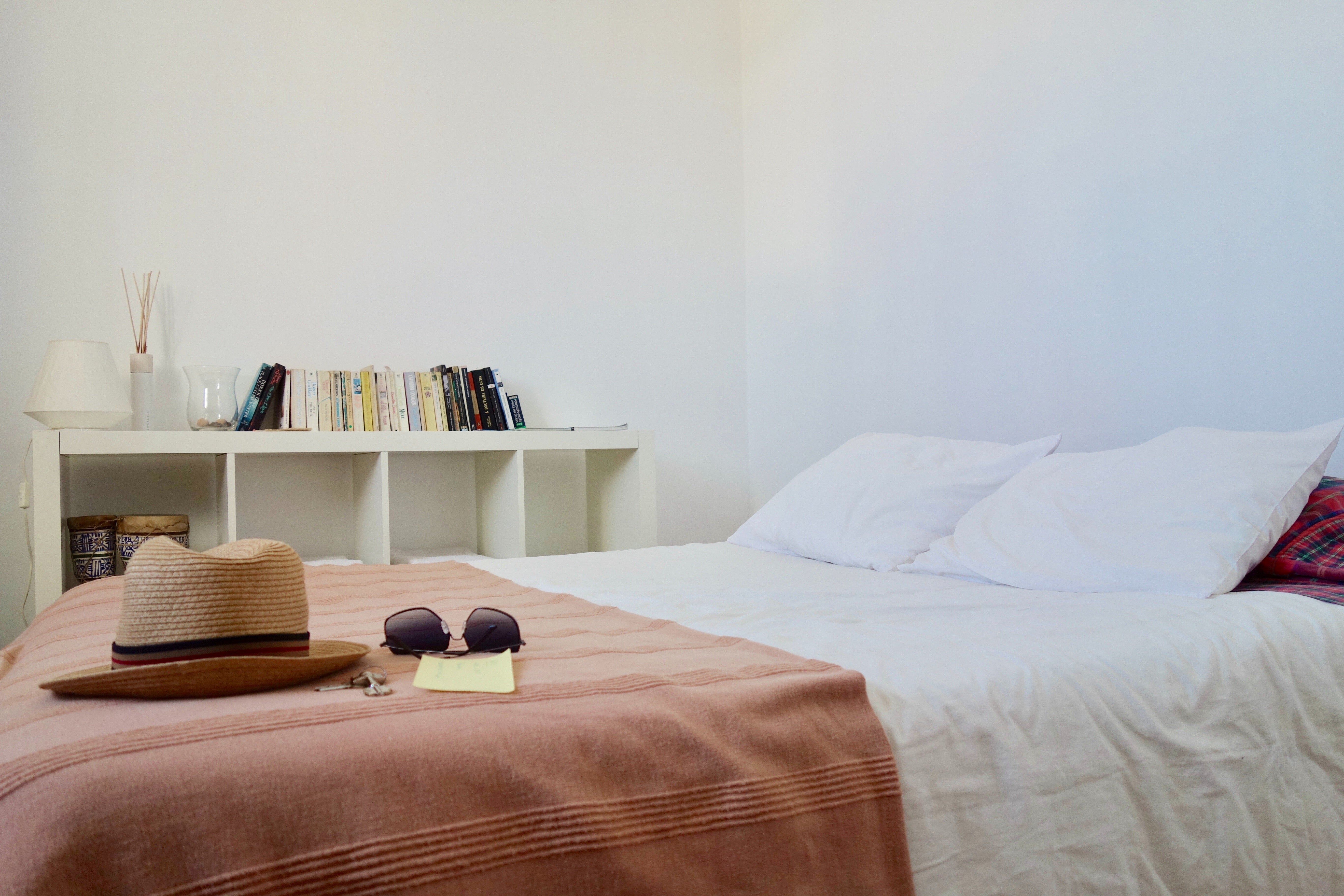 Survey: What Airbnb Guests Are Doing in Your Home (And Where They Do It)

We asked more than 1,000 Airbnb guests and 100 hosts about how often they demonstrated or discovered objectionable behaviors. From minor frustrations to freakier infractions, we discovered how often visitors violated the rules they promised to follow. 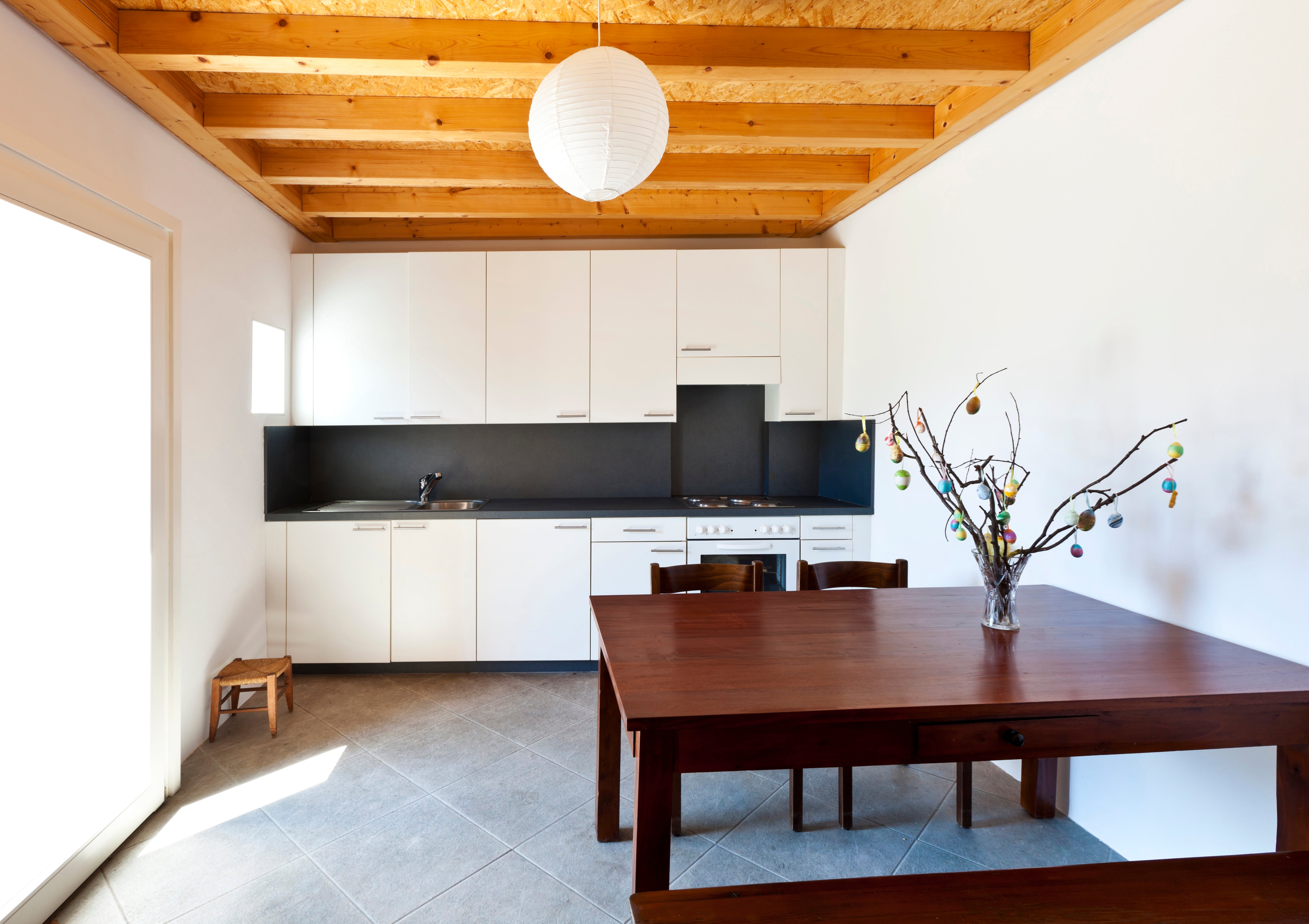 Most Underrated Town in Every State

The complete guide to the most underrated towns by state. We consider unemployment rate, cost of living, historical sites and monuments, entertainment and dining options, and much more. 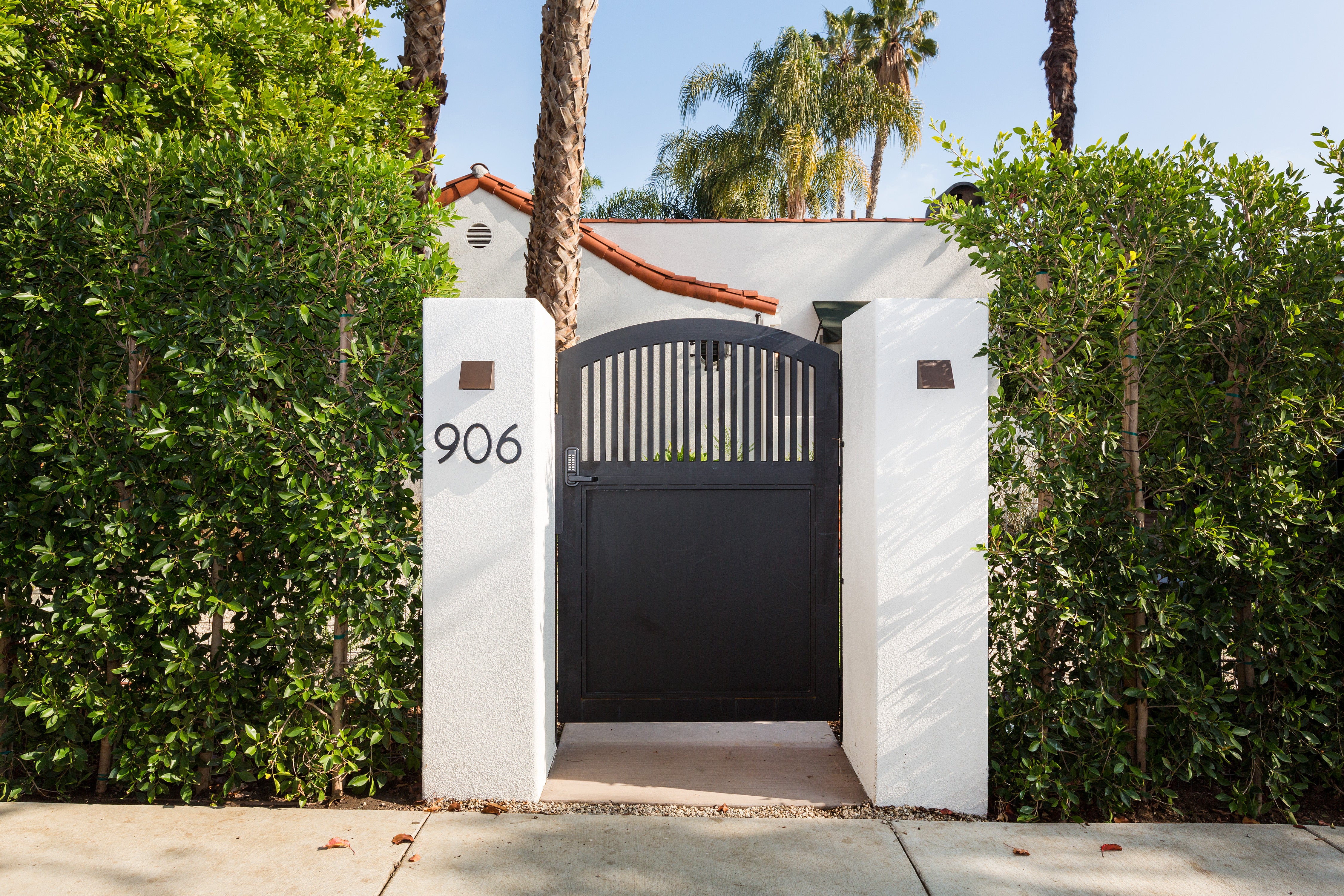 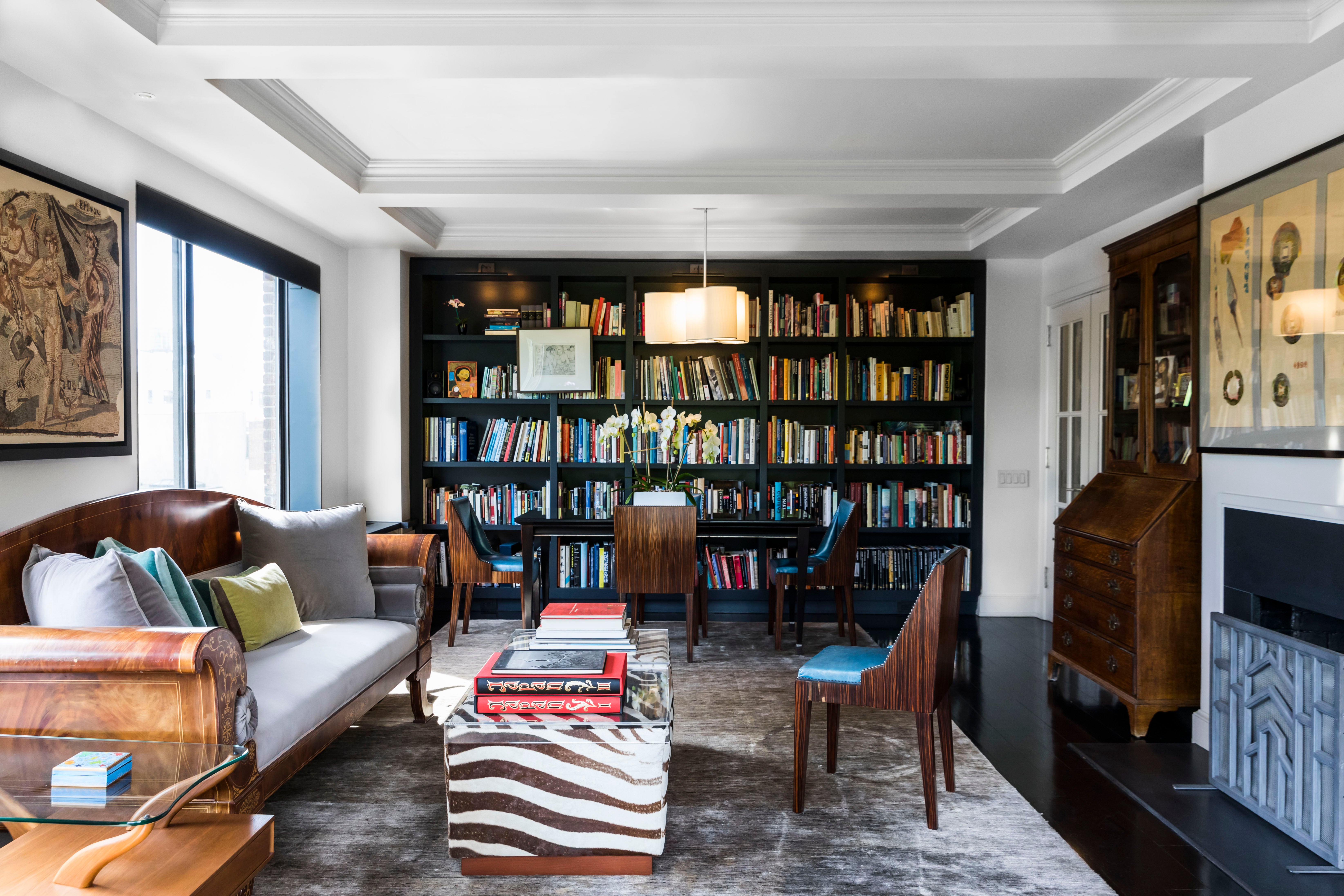